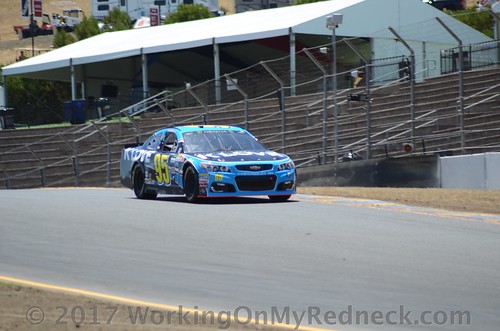 McDowell and LFR started off strong with a 16th place qualifying run on Friday. Although the team expected to make it to the final round of qualifying, they knew McDowell would make up the positions during the race on Sunday.

The start of the Toyota / Save Mart 350 began with McDowell working his way up to 13th place until the first caution of the race.

The first caution flag fell on lap 14 in the first stage, and McDowell was able to pit for four tires and an adjustment to help him in the right hand turns.

McDowell restarted 22nd and raced until Todd Parrott made the call to pit with two laps remaining in the stage. Unfortunately, pit road closed just as McDowell entered pit road, forcing him to serve a penalty and restart at the rear of the field at the start of stage two.

McDowell was able to go back down pit road before the start of the second stage to fix some right rear damage that was acquired early in the race before heading to the rear of the field.

McDowell raced his way back through the field during the second stage until a caution came out with 20 laps to go in the stage. McDowell still had issues with right hand turns, but said the No. 95 K-LOVE Chevrolet SS was otherwise handling well.

The next caution flag fell eight laps later, and Todd Parrott made the call to stay out and not pit. He restarted 17th and made it as far as 13th, until Parrott made another strategic call to pit with three laps to go in the stage.

With 23 laps remaining, Parrott and McDowell discussed pitting, and would stop for four tires and no adjustments with 20 laps to go.

During the remaining laps, McDowell was faster than a handful of cars in front of him and was able to catch a few before crossing the finish line in 14th place, earning LFR’s third Top-15 finish of the season and sixth Top-25 in a row. McDowell made a total of 112 green flag passes, the third most of anyone in the field during Sunday’s race.

“It was a good day,” said McDowell. “We had good speed all day, but we just got caught pitting right as pit road closed. I was right at it. That put us at the tail end of the field, and we lost all the track position. That really mixed up the strategy. We ended up having to use an extra set of tires, but it worked out at the end. We were able to salvage a Top-15, even though we had a Top-10 car, but you’ll have days like that.”