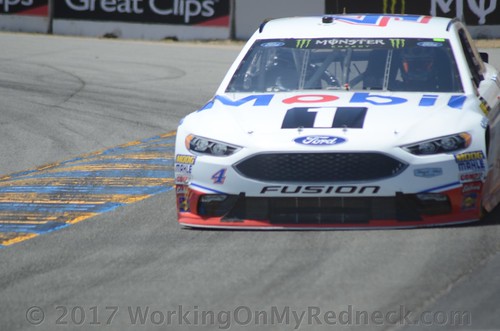 ● The Mobil 1 Ford surrendered the third position on lap 15 for four tires and fuel. Harvick returned to the track in the 13th position.

● Came to pit road on lap 23 before the end of Stage 1 for four tires and fuel.

● Came to pit road from the second position on lap 48 for four tires and fuel.

● Stayed out at the conclusion of Stage 2.

● Surrendered the second position to come to pit road for four tires and fuel on lap 71.

● This was Harvick’s first NASCAR Cup Series win of 2017, his first at Sonoma and the 36th of his career. It was his 13th Cup Series victory since joining Stewart-Haas Racing (SHR) in 2014.

● The victory secured Harvick’s spot in the 16-driver, 10-race playoff which begins Sept. 17 at Chicagoland Speedway in Joliet, Illinois.

● This was Harvick’s first NASCAR Cup Series win with Ford. He became the 83rd different driver to win a Cup Series race in a Ford.

● Harvick led twice for 24 laps to bring his laps-led total at Sonoma to 60.

● This was the 38th points-paying Monster Energy NASCAR Cup Series win for SHR and its second at Sonoma.

● There were six caution periods for a total of 12 laps.

● Twenty-three of the 38 drivers in the Save Mart 350k finished on the lead lap.

● Kyle Larson continues to lead the championship standings with 659 points and has a 13-point margin over his nearest pursuer, Martin Truex Jr.

Kevin Harvick, driver of the No. 4 Mobil 1 Ford Fusion for Stewart-Haas Racing:

“I’m so excited. I think as you look at it, getting our first win with Ford, this has been a great journey for us as an organization and team – Kurt (Busch) winning the Daytona 500, and we’ve run well; everybody from Busch, Jimmy John’s and Mobil 1, Outback, Hunt Brothers. It’s a great day. It finally all came together and we were able to not have any cautions there at the end. Rodney (Childers, crew chief) had great strategy and I was able to take care of the car and get out front. I felt like the 78 (Martin Truex Jr.) was the car we had to race, and then he had problems, and from there we were in control.

“Right off the bat, I think you knew you were going to have some fenders caved in. That is just how it is going to go with the short stages trying to get points. I felt like our car was good enough to not chase stage points and go after the win today, and it all worked out.

“This is a bunch of great people that believe in each other. The last three years and even this year have shown that. I love every one of them and we are in this journey together, and it has been a lot of fun.

“It means a ton to finally check this one off the list. I feel like we have been close a couple times but never put it all together. Being so close to home and having raced here so much, this was one that was on the top of the list, and today we were able to check that box.”