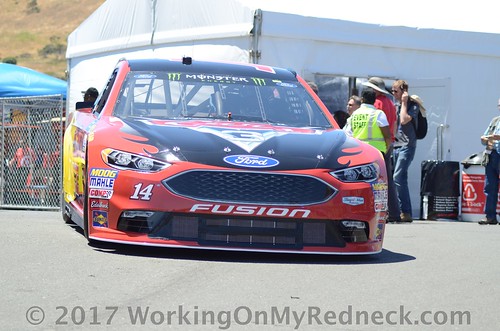 Remember comedian Jeff Foxworthy’s joke about the famous last words of a “redneck?”

Clint Bowyer, driver of the No. 14 Mobil 1 Ford Fusion for Stewart-Haas Racing (SHR), is certainly an expert on racing in the Monster Energy NASCAR Cup Series and, admittedly, he’s witnessed his fare share of redneck behavior in his lifetime, the kind referred to by Foxworthy. So, take Bowyer’s word when he says that what the world’s best stock car drivers will do during Saturday night’s Coke Zero 400 presented by Coca-Cola at Daytona (Fla.) International Speedway isn’t nearly as easy as it looks.

“I saw something on Twitter after that wreck that we had in Kansas with Aric Almirola and Danica (Patrick) and Joey Logano, and it was captioned, ‘Do you still think that you could do this just like you’re driving down a highway?’” Bowyer said with a laugh. “I mean, people forget that we’re going upwards of 200 miles an hour on racetracks and that it is very dangerous.”

Bowyer, who finished the 2007 Daytona 500 upside down, on fire and uninjured, said the exponential advances in safety might be luring people into believing the sport has become 100-percent safe. But accidents like he described in Kansas and the hard hits suffered by Jimmie Johnson and Jamie McMurray at Pocono (Pa.) Raceway remind you that danger element is never far away.

Apart from the danger, it’s also a physically demanding job.

“You don’t see that week-in and week-out, and maybe every week you don’t see that, but when you do see it, it reminds you just how dangerous this sport is,” Bowyer said. “And then the heat element of it, the duration of it, the endurance of the races, everything that goes into it. Hey, do we have to go out and run a marathon or bench press 500 pounds to do what we do? No, but you do have to be conditioned just like any other athlete does for his or her profession.”

Given the danger and demands, it wouldn’t be a surprise to see Bowyer and others shy away from the sport after a while.

“Are you kidding?” he said. “I wouldn’t want do anything else in life. My life is either racing, talking about racing, watching racing or traveling to racing.”

day’s race is one of four restrictor-plate events held each year and often results in the multicar accidents sure to make ESPN’s SportsCenter or local news highlights in the days following the race. A 17-car accident on lap 127 triggered by other drivers caused Bowyer’s bid for a Daytona 500 victory to end with a trip to the garage, leaving him with a 32nd-place finish.

The Daytona 500 in February marked his debut with SHR, replacing three-time champion Tony Stewart. Since the debut, Bowyer enjoyed mostly good times at SHR, posting three top-five finishes and six top-10s, including a second-place finish last weekend on the road course at Sonoma (Calif.) Raceway. The No. 14 Ford team, led by crew chief Mike Bugarewicz, is 11th in points. The team’s goal is a victory to earn one of 16 berths in the NASCAR playoffs that begin in September.

Bowyer has good chance to do that Saturday night at Daytona. He’s earned three top-five finishes, 11 top-10s and has led a total of 153 laps in his 23 career Cup Series starts at Daytona. The Emporia, Kansas native also won the July 2009 Xfinity race there. While he hasn’t won at Daytona in a Cup Series race, he has won two races at Daytona’s sister track Talladega (Ala.) Superspeedway.

Hopefully for Bowyer and his team, that victory will come Saturday night.

Who knows, he might even make it look easy.