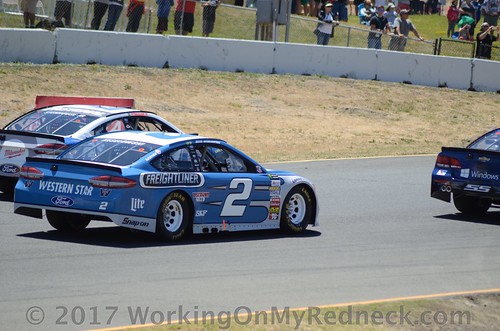 Recap: Brad Keselowski earned his career-best Sonoma Raceway finish with a third-place result in the Monster Energy NASCAR Cup Series event on Sunday afternoon. After a disappointing qualifying session that resulted in a 23rd-place starting spot, Keselowski quickly began to show that his Ford Fusion has great speed on the 1.99-mile road course by turning laps faster than the race leader. The 2012 series champion drove up to the 16th position before the first caution of the day flew at lap 14, during which crew chief Brian Wilson kept his driver on track to pick up track position. Keselowski restarted the race from the second spot at lap 18. Unfortunately, on the first lap back to green, Keselowski made slight contact with the No. 37 of Chris Buescher, resulting in minimal damage to the front of the Elite Support machine. A few laps later, he and the No. 14 of Clint Bowyer made contact that ended with Bowyer spinning off the race surface, but Keselowski was able to continue. The handling of the Ford Fusion was altered slightly from these skirmishes and Keselowski finished the first stage in the 28th position. Having made a pit stop just before the end of stage one, Keselowski restarted the second, 25-lap stage from the 13th position at lap 30. Wilson made no call for his driver to come down pit road during the second stage and Keselowski raced his way up to the second position at the end to score nine bonus points, despite having to deal with a tight-handling Ford in the high-speed sections of the track. For the final, 60-lap stage Keselowski restarted in the 23rd position and, again, quietly worked his way through the field. When other teams began making green-flag pit stops, Wilson and Keselowski elected to run their fuel tank dry. Keselowski assumed the lead at lap 72. When they did make their pit stop at lap 93, Keselowski only cycled back to the 12th position before using his fresh Goodyear tires to run back through the field to finish third for his first top-five finish at Sonoma.

Quote: “The Elite Support Ford was really good today. We didn’t have the qualifying fun we wanted. We had amazing race pace. That’s a credit to everyone at Team Penske. It felt really good. I just wish I could run this race again I think I might have had better car than driver today and I learned a lot. Just an amazing fun day.”

Recap:  Joey Logano started 18th and finished 12th in the No. 22 Shell-Pennzoil Ford Fusion in Sunday afternoon’s Toyota Save Mart 350 at Sonoma Raceway. At the drop of the green flag, Logano struggled with rear grip in his Shell-Pennzoil Ford but maintained his position inside the top-20 until the first pit stop at lap 14. Crew chief Todd Gordon called for air pressure adjustments and those changes allowed Logano to rally up to the sixth position before the end of the first stage. Logano then ran inside the top-10 until pit strategy shuffled at lap 39 when the team pitted a second time. Gordon again called for air pressure adjustments while also making a wedge adjustment to the Shell-Pennzoil Ford. Logano would again drive forward, this time finishing the second stage in the fifth position. The team would run as high as second before pitting the fourth and final time at lap 79 where Logano was deemed too fast entering the pits. After serving the pass through penalty, Logano would work his way back to the 12th finishing position.

Quote: “We had a pretty good car and made adjustments to make it better, probably a top-5 car once we had it going but I sped down pit road. We had the winning strategy and scored a lot of stage points. With a little more speed we maybe could have won the thing. I just sped down pit road and lost so much track position after that. That one stings a little bit. I don’t know why we sped. I can’t really figure it out yet. We will have to look at it and figure it out.”