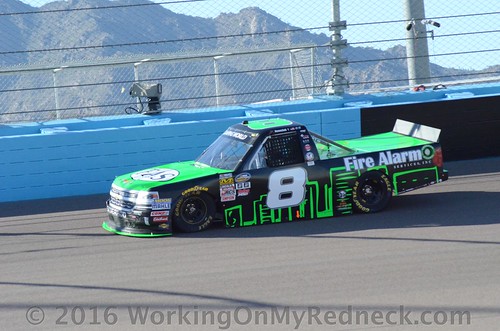 With six laps to go, John Hunter Nemechek made his bold, last-gasp move.

It is Deja Vu all over again!

“Every one of these guys who works on this team, this is awesome,” said John Hunter Nemechek, who passed Johnny Sauter on the high-side with six circuits left.

The dramatic ending to a race that ran remarkably clean for most of the first two stages was set up by an incident involving ThorSport teammates Grant Enfinger and Matt Crafton with 15 laps to go.

Nemechek and all the other contenders — except for Sauter — used the caution to head to pit road. Nemechek’s crew chief, Gere Kennon, outfitted the No. 8 NEMCO Motorsports Chevrolet with four fresh tires.

The reason the team won?

“He drove his butt off tonight,” Kennon said of Nemechek, who had notched one top-10 finish previously at Iowa. “He was awesome. It’s awesome for the (Nemechek) family.”

Sauter settled for second after leading for 72 laps. The series points leader said being passed by Chase Briscoe — who led seven laps before sliding to seventh — had likely already relegated him to a second-at-best finish.

“I got taken to school by Chase Briscoe,” Sauter said. “I think tonight was a second-place finish regardless.”

Sauter retains a 42-point lead over Christopher Bell, who finished fifth after dominating roughly two-thirds of the race.

Nemechek notched his fifth career NASCAR Camping World Truck Series win. He stood in the fourth position when he and several others emerged from that final, fateful pit stop.

“Somehow it all worked out,” Nemechek said. ”The last strategy call, taking four tires instead of two, there at the end, we kind of had that strategy if a caution came out towards the end we were going to come no matter what, and no matter who came, just because tires were such a big factor.”

Noah Gragson earned the pole — his second of the season — held off Bell for the first 16 laps. Bell rode the high-line to surge ahead one lap later. The Kyle Busch Motorsports teammates remained 1-2 the remainder of the 60-lap opening stage, which Bell won by building a 3.2-seconds lead by the time the stint ended.

“Drove like a dream,” Bell said at the time.

That blissful state lingered for the 22-year-old Oklahoman — until it was interrupted.

While the trucks directly behind Bell shuffled, his No. 4 Kyle Busch Motorsports Toyota continued to shine.

But dreams of any type rarely last long and Bell saw his diminished by a gamble that didn’t pay off.

With eight laps remaining in the second stage, Bell stayed on the race track while most of the other leaders pitted and added fresh tires following a caution precipitated by Mike Senica’s spin in Turn 2.

The gamble cost him. Sauter swept high to pass Bell with five laps remaining in stage two, but another caution waved after an incident involving Kaz Grala, Cody Coughlin and Ben Rhodes.

Bell remained optimistic despite his rapid drop to 12th that preceded the final stage.

“It wouldn’t be fun if it was easy,” Bell said shortly before the race resumed.

Friday proved to be anything but — for everyone but the Nemecheks, who reveled in another dream-like Victory Lane celebration after spending all night getting the truck ready.

“It feels really good,” said Nemechek, who earned the pole at Iowa last season and felt a measure of redemption after surging to the win this time. “This is unbelievable for sure. … Restarting fourth there and pushing Johnny into Turn 1, I was kind of in the catbird seat.”

Check out the unofficial results of the M&M’s 200 at Iowa Speedway.