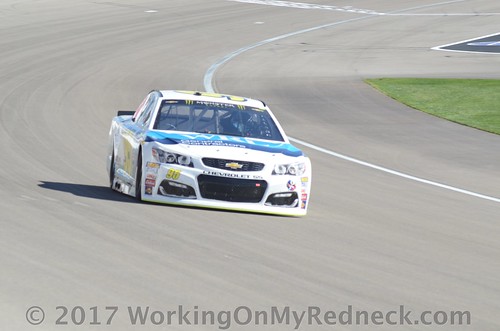 Leavine Family Racing (LFR) and Michael McDowell continue to improve during the 2017 Monster Energy NASCAR Cup Series (MENCS) season, as they earned their fifth Top-25 finish in a row at Michigan International Speedway (MIS) on Sunday.

Practice and qualifying went well for the team, as McDowell was able to make the second round of qualifying. He ended the round 22nd fastest, where he would start the FireKeepers Casino 400 on Sunday.

McDowell began the 400-mile race in a three-wide battle, until he was able to jump into the Top-20. The field made it until lap 8, when the first caution came out for debris on the track. McDowell pitted for four tires, while the leaders stayed out.

McDowell restarted toward the back of the pack, but quickly moved up towards his starting position until a competition caution came out on lap 25. Todd Parrott made the call to pit for two right side tires and a can of fuel.

The field restarted on lap 30, and McDowell was able to race his way back into the Top-20 before eventually falling back due to tire-wear. McDowell went on to finish 24th in the first stage.

The second stage of the FireKeepers Casino began with a long green flag run, where the leaders eventually caught McDowell to put him a lap down. With just under 20 laps to go in the stage, Todd Parrott made the call to make a green flag pit stop, putting McDowell another lap down until the leaders made their pit stops.

McDowell finished the second stage one lap down, telling the crew that although his No. 95 WRL General Contractors Chevrolet SS was not handling the best, he felt as though the car was the best it had been all day.

The final stage began on lap 127 of 200, with McDowell fighting for the Lucky Dog position. With 65 laps to go, McDowell reported his No. 95 Chevy was handling extremely tight all the way through.

McDowell made another green flag stop with just over 20 laps remaining. A caution for debris came out immediately after McDowell left pit road and headed back onto the track.

While under caution, McDowell reported something off about the front end of his car. Todd Parrott was able to see that there was a hole in the nose of McDowell’s No. 95 Chevy, and told him to pit in order to patch the hole.

McDowell pitted for four tires, and the crew was able to patch the hole on the grill. McDowell went back out to finish the race, when a late caution left debris on the track. McDowell earned the Lucky Dog spot, but ran over the debris, which forced him to enter pit road for the crew to make sure no damage was made to the car.

Fortunately, there was no major damage. McDowell went on to finish the race in 23rd, earning the team’s fifth Top-25 finish in a row.

“As a whole, it wasn’t a bad weekend,” said McDowell. “I think all of the RCR Alliance cars struggled speed-wise. We were all right there running near each other. I felt like as a team we maximized our opportunity this weekend. We just have to figure out where the speed is at and how to get it.”