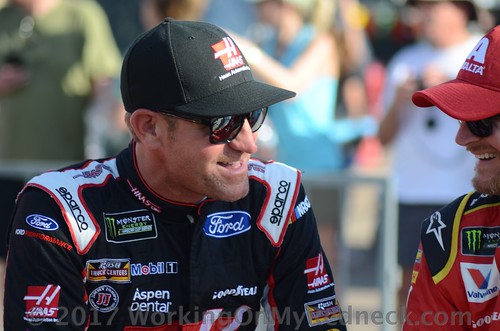 ● Climbed to second on lap 12 after a restart.

● Reported his car grew looser as the stage progressed.

● Bowyer turned top-five lap times in the second half of stage.

● Dropped to ninth on a restart and reported his car was tight in traffic.

● Pitted for four tires and fuel under caution and restarted 12th with 47 to go.

● Bowyer moved from 12th to eighth during the next two laps.

● Bowyer was running seventh with 16 laps to go but brushed the outside retaining wall in turn two. This brought out the caution and sent Bowyer to the pits for an unscheduled stop to fix right-side damage.

● He rarely raced outside the top-10 throughout therace.

● Cars were turning laps speeds in excess of 195 mph.

● Kyle Larson won the FireKeepers 400 to score his third career Monster Energy NASCAR Cup Series victory, his second of the season and his second at Michigan.

Clint Bowyer, driver of the No. 41 Haas Automation Ford Fusion for Stewart-Haas Racing:

“We were sitting there seventh with 20 laps to go reeling them in thinking this was our day, and then a debris caution forces a restart. Restarts are the only times you can pass, so everyone was racing hard, and I got into the wall. It killed our day.”