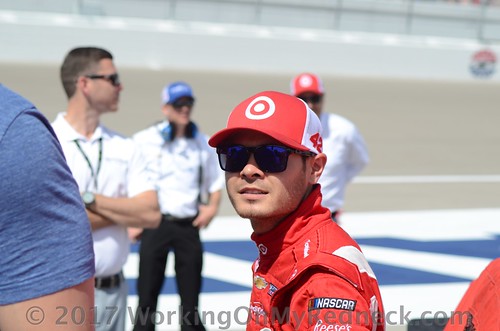 In Sunday’s FireKeepers Casino 400 at Michigan International Speedway, Larson graduated with high honors, using a series of exceptional restarts to win his second Monster Energy NASCAR Cup Series race of the season and his second in a row, dating to last August, at the two-mile track in the Irish Hills.

At Dover, Larson lost a race in which he had the dominant car when Johnson snookered him on a late restart and seized control of the race.

On Sunday, with a strong push from Ryan Blaney in the bottom lane during a restart on Lap 186 of 200, Larson, the polesitter cleared Kyle Busch for the lead through the first two corners and stayed out front the rest of the way—through two more quick cautions—to win for the third time in his career.

For everyone else, the bottom lane meant guaranteed lost positions, making Larson’s decisive restart all the more impressive—almost as impressive as his post-race burnout, as Larson spun his No. 42 Chip Ganassi Racing Chevrolet, laying rubber across Victory Lane.

“Yeah, Ryan Blaney gave me a heck of a push,” Larson said of the decisive restart that helped earn his third career victory. “So I’ve really got to thank him a ton. I knew the Penske cars took off good, so I was happy to see him behind me. For us to withstand a few restarts there with some tough competitors there was pretty important. I can’t thank these guys enough.”

Larson said that, though restarts are quite different at Michigan than they are at Dover, he studied video of the Dover race and learned from the experience.

“I definitely watched the replay,” Larson said. “We looked at Jimmie’s driver data versus mine from the final restart at Dover, learned a little bit from that stuff.

The difference was that, on Sunday, it was a drag race Larson won.

Nor was the occasion lost on Larson, who has been bringing his two-year-old son Owen to press conferences of late.

“What a great Father’s Day present for myself and all the other fathers out there,” Larson said. “My dad is here today, too. So I’m looking forward to celebrating with him. We’ve been so close to so many other wins. This is our second Cup win of the year, but we’ve had six second-place finishes. All-in-all, it’s a good season so far and we’ll continue to keep building on what we’ve got.”

Both Sunday’s victory and Larson’s win at Auto Club Speedway (Fontana, Calif.) in March came from the pole, and all three of his triumphs have come on two-mile tracks.

Larson got to the finish line .993 seconds ahead of Chase Elliott, who, like third-place finisher Joey Logano, felt he got the most out of his car.

“From where we started the day to where we ended up, I was really proud of our effort,” Elliott said. “I really think we over-achieved today from what we had on Friday and Saturday, and even last night, I was getting a little nervous about how the day was going to go.

“So I’m happy that we could have a solid day and put ourselves in position and kind of rely on some late-race restarts. We had a couple of opportunities to get the lead. And, unfortunately, it just didn’t work out. But we’ll move on. Congratulations to Kyle (Larson). He had a fast car today and we’ll try to go get ‘em next week.”

Star-crossed Kyle Busch had a 1.4-second lead when NASCAR called a caution on Lap 180 because of debris in Turn 2. After Larson passed him for the lead on the Lap 186 restart, Busch ultimately faded to seventh at the finish, still searching for his first victory of the season.

Denny Hamlin restarted beside Larson on Lap 196 but lost the third-place battle to Logano. Jamie McMurray, Larson’s teammate, ran fifth. Martin Truex Jr. came home fifth despite leading 62 laps (second only to Larson’s 96) and was victimized by a succession of late-race restarts in the bottom lane.

Though Truex won both the first and second 60-lap stages and increased his stash of playoff points to a series-leading 20, Larson regained the lead in championship points by five over Truex. Kyle Busch is 130 points back in third place.

Check out the unofficial results of the FireKeepers Casino 400.