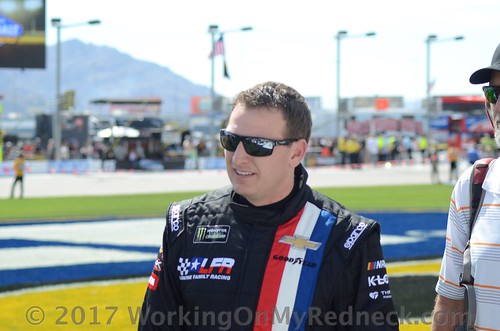 Leavine Family Racing (LFR) and Michael McDowell are looking to extend their streak of Top-25 finishes at Michigan International Speedway (MIS), fresh off their best qualifying effort of the season at Pocono Raceway.

This trip to Michigan will only be McDowell’s second time with LFR. He has competed at MIS a total of six times in the Monster Energy NASCAR Cup Series (MENCS).

This time around, McDowell is excited to race at the home track of Chevrolet, as he and LFR are consistently bringing fast cars to the track each weekend.

Although McDowell’s experience at MIS is limited, the team is optimistic in the setup package they will be taking to the two-mile, D-shaped speedway.

“I didn’t get to practice and qualify at Michigan last year, because I raced at Road America on Saturday in the XFINITY series,” said McDowell. “Sam Hornish Jr. drove for us until I made it back, and then I hopped in for the race. It was a really tough race for us, and we really struggled. Luckily, our downforce package has been really good, and that is important at Michigan.

We have really good engines from ECR, so power is never an issue, so it should be a good racetrack for us. It’s still a fast and treacherous track, but hopefully we put on a good race.”

LFR is beginning to hit their stride just as the summer is heating up, and McDowell is ready to race at the home track of Chevrolet and represent the Chevy stable in his No. 95 WRL Chevrolet SS.

“Michigan is a big weekend for all of us on Team Chevy,” continued McDowell. “I am really excited to compete this weekend and represent our manufacturer. I think LFR has a good chance at a solid finish, so I’m looking forward to putting on a good show for everyone at Chevrolet.