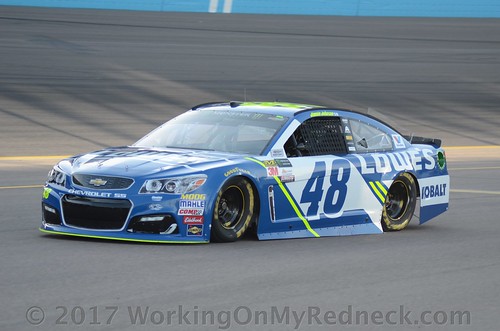 Two laps after posting his best time of the session, Johnson lost control of his No. 48 Hendrick Motorsports Chevrolet in the middle of Turns 3 and 4 at Michigan International Speedway.

As the car spun, the seven-time champion was able to keep it away from the outside wall, but the No. 48 shot toward the infield, and the splitter dug into the grass as soon as the car left the asphalt.

Johnson’s first inclination was that his car was damaged severely enough to require a backup, but after he drove the Chevy back to the garage, crew chief Chad Knaus opted to try to repair the primary entry.

“I got loose into Turn 3 and fought it for a long time and unfortunately came around,” Johnson said of the accident. “Did a nice job of keeping it off the outside wall, but came back down the hill and into the grass and the front end dug in pretty good.

“I’m pretty surprised the guys feel like the damage isn’t too bad, and they can get that stuff pulled back out and get the shape of the body back. So we’re out for the rest of this practice and we’ll get back on track for the second one. Not the way we wanted to start the day, but it is what it is.”

Not so fast. After working on the car during the NASCAR XFINITY Series qualifying session, Knaus ultimately decided that it wasn’t feasible to repair the primary car.

Accordingly, the No. 48 team rolled out the backup, and Johnson will have to start from the rear in Sunday’s FireKeepers Casino 400 because of the post-qualifying car change.

In the backup, Johnson was ninth fastest in final practice!