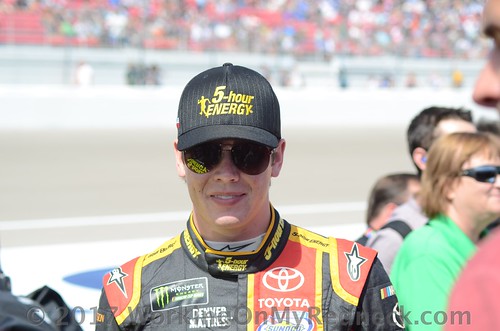 Michigan native Erik Jones is hoping the math adds up in his favor this week with the NASCAR Cup Series rookie coming off a career-best finish and getting to compete in front of his home state fans.

Jones and his Furniture Row Racing team head into Sunday’s FireKeepers Casino 400 after their first top-five and career-best third-place finish last week at Pocono (Pa.) Raceway. They’ll unload the No. 77 5-hour ENERGY Extra Strength Toyota Camry in the Michigan International Speedway garage area with that accomplishment still fresh in their minds as added fuel for their positive momentum.

The 21-year-old’s hometown of Byron, Mich., is approximately 70 miles due north of Michigan International Speedway. This week he is staying in the house he grew up in, spending time with childhood friends, and sleeping in his old bedroom. He’s even talked about commuting to and from the race track during the weekend.

“Unfortunately, I haven’t had a ton of time to race at Michigan International Speedway,” said Jones. “I’ve run one [NASCAR Camping World] Truck race and one [NASCAR] Xfinity race there. It’s just the way things worked out, the way the age rules were when I was in the Truck Series, I didn’t have a chance to run there in 2014. I haven’t had a lot of time there but I have had some good runs. So we were always decent there, had OK speed and I feel every time I go back I get a little a bit more comfortable.

“Michigan is a bit off on its own with it being a recent repave. It’s not a whole lot like Fontana, another two-mile track. Funny enough, I’ve actually been there in a Cup car with a low downforce package for a test there maybe two years ago. So I have a little bit of time there with what we’re racing now.”

Jones is tied with Ryan Newman for 16th in the 2017 NASCAR Cup Series point standings after the first 14 races. He is three points behind Ricky Stenhouse Jr. for 15th and 47 behind Clint Bowyer for 10th. Jones is second in the Sunoco Rookie of the Year point standings, trailing Daniel Suarez by eight points and ahead of third-place Ty Dillon by 14 points.

The 200-lap, 400-mile FireKeepers Casino 400 will consist of three stages of 60/60/80 laps (laps 60/120/200). In each of the first two stages, drivers finishing in the top 10 will receive championship points (10 to 1) with the winner receiving one playoff point. The overall race winner will earn 40 championship points and five playoff points. Playoff points accumulated during the season will carry through the first three of the four playoff rounds.