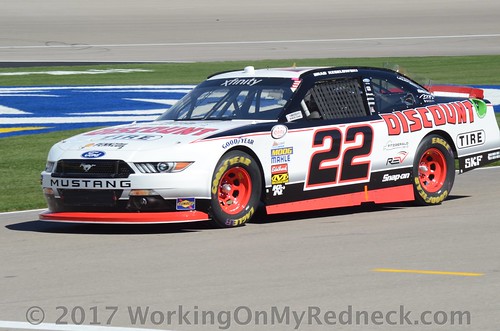 Recap: Brad Keselowski led the most laps in Saturday’s Irish Hills 250 at Michigan International Speedway (MIS) before settling for a fourth-place finish in the No. 22 Discount Tire Ford Mustang at his home track. After starting the race in the second position, Keselowski had a dramatic opening lap as he and the No. 18 of Kyle Busch made contact going into the first corner. The contact resulted in Busch spinning out and Keselowski receiving slight damage to the nose of his Ford Mustang, but he was able to continue as the race leader. The two-time winner at MIS was able to lead all 30 laps of the opening stage to score his fourth-consecutive stage win in NASCAR XFINITY Series competition. After pitting for four tires and fuel during the break, Keselowski restarted the race from the sixth position at lap 38 as other teams elected to make two-tire stops for track position. The 2010 series champion raced his way back into the lead at lap 50 before a lap 57 caution brought about decision time for the rest of the field, as NASCAR was hopeful to go back to racing before the end of the second, 30-lap stage. Anticipating the restart, crew chief Greg Erwin called Keselowski down pit road for four Goodyear tires and fuel, but despite a valiant effort, the track was not ready for racing before the end of the stage. As a result, Keselowski finished 12th in the stage behind teams who elected to stay out during the caution. After those drivers made pit stops during the break, Keselowski cycled up to the fourth position at the start of the final, 65-lap stage. He re-assumed the lead at lap 72 before another caution at lap 83 brought him back down pit road for a two-tire pit stop. Unfortunately, after receiving his service, Keselowski had to wait on another competitor before pulling out of his pit stall. He would restart the race from the second positon at lap 88 and made several valiant moves to get the lead back before crossing the finish line in the fourth position.

Quote:  “Good race. Denny (Hamlin) was the class of the field there at the end. I just couldn’t get the back underneath the Discount Tire Ford to hang with him. That was a bummer. The next to last restart, I thought that I had the 9 cleared but he just got a big pull. I don’t know if he got a push from behind and got up beside me and pulled a side-draft, and then Denny got behind. I would have been okay if it was just him, but the two of them together, I couldn’t defend it. It was good run all-and-all. A lot to be proud of.”