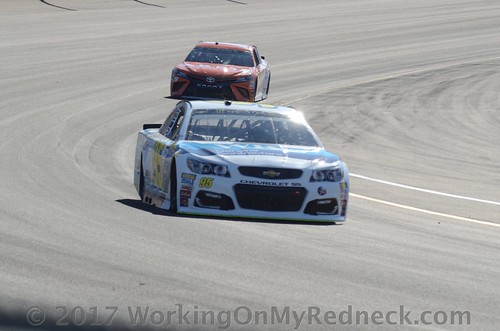 Leavine Family Racing (LFR) and Michael McDowell earned their fourth Top-25 finish in a row after a season-best qualifying effort of 11th at Pocono Raceway.

After showing speed and potential during the first practice of the weekend, McDowell and LFR were confident they would earn a solid starting position in qualifying later that afternoon.

The team made it through the first round of qualifying and finished 12th in the second round. The Top-12 advanced into the final round, where McDowell ended up 11th fastest, earning the team’s best starting position of the 2017 Monster Energy NASCAR Cup Series (MENCS) season.

During final practice on Saturday, the team could not find the best setup for the No. 95 FDNY Foundation Chevrolet SS, and knew they would have their work cutout for them before the race on Sunday.

At the beginning of the Axalta Presents the Pocono 400, McDowell made a clean start and held his ground racing in the Top-15 for the majority of the first stage. After making a green flag pit stop, McDowell dropped back while the rest of the field made their green flag stops. McDowell finished the first stage in 22nd.

After starting the second stage in the Top-25, McDowell was able to get back into the Top-20, as the car was handling much better. As the field began to make pit stops during the long green flag run, McDowell made it all the way to sixth place, before pitting with 10 laps to go in the stage.

With just a handful of laps to go, the field was red-flagged after a wreck led to a long cleanup process. McDowell went on to earn a Top-25 finishing spot in the second stage and did not pit before the start of the third stage.

McDowell started the final stage in the Top-10, since he did not pit during the break, but dropped back into the Top-25, as he dealt with a tough-handling No. 95 FDNY Foundation Chevy.

McDowell made another green flag stop with just over 30 laps to go and made it back to 21st with 20 laps to go before a caution came out towards the end of the race.

Crew Chief, Todd Parrott, made the call to pit one last time for four tires, while putting no fuel in the car.

With one lap to go, McDowell reported he had a flat tire, but continued to cross the start / finish line in 24th, earning LFR’s fourth Top-25 finish in a row.

“It was a tough day for us,” said McDowell. “We had a really good qualifying effort, and it was cool to make it to the third round. We just didn’t have a whole lot of speed during the race. We had a couple mishaps in final practice that just set us back, and we weren’t able to get it dialed in as much as we hoped to. That is just part of racing.”

Next up for LFR and McDowell is the FireKeepers Casino 400 at Michigan International Speedway, where LFR looks to extend their streak of Top-25 finishes.