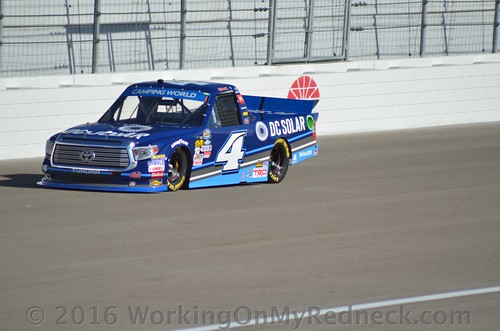 Christopher Bell returns to Gateway Motorsports Park in Madison Ill., for Saturday’s Drivin’ for Linemen 200 as the defending race winner. Bell also enters the 160-lap event as the most recent winner in the NASCAR Camping World Truck Series, having narrowly edge Chase Briscoe in a photo finish at Texas Motor Speedway in Ft. Worth last Friday night.

Last year’s win at the 1.25-mile oval helped the Oklahoma native secure his spot in the eight-driver field for the inaugural Truck Series Chase. Bell, who led twice for a total of 38 laps, cleared fellow Sunoco Rookie of the Year contender Ben Rhodes through Turns 1 and 2 after a lap-158 restart and remained out front for the final two laps to secure his first NASCAR win on pavement.

This year, Bell has already secured his spot in the Truck Series playoffs having collected two wins in the first seven events of the season. He made history at Atlanta Motor Speedway in Hampton, Ga., in February when he became the first driver in one of NASCAR’s top three divisions to sweep all three stages of a race leading a race-high 99 laps en route to the victory. While on paper his victory last week at Texas was once again dominant, having led 92 of the final 98 laps, the end result was similar to last year’s Gateway win where he lost the lead late and then gained it back with a strong restart in the closing laps.

Bell will be looking to ring in victory number three of the season Saturday night at Gateway as he is drivin’ to make it back-to-back wins on the Truck Series schedule, as well as back-to-back trips to victory lane at the challenging 1.25-mile oval.

Are you looking forward to going back to Gateway as the defending race winner this year?

“Gateway was a good race for us last year because we were able to get a win and earn a spot in the Chase, but it was kind of circumstances that got us the win. A few of the strong guys crashing late in the race combined with a good pit stop, followed by a good restart won us the race. I’m looking forward to going back this year and trying to win the race as the dominant truck like we have the other two wins we’ve collected this year. I feel like every time we’ve gone to the track this year we’ve had really good speed and a Tundra that’s capable of winning the race.”

Does having two very different corners make it tough to get the setup of your truck perfect at Gateway?

“It’s definitely takes a little bit of give and take to be good at Gateway, because the corners are so different. You can’t be perfect in both corners and knowing what we need to sacrifice to be good is something that Rudy (Fugle, crew chief) is really good at. Whether that’s to give up something in one and two, or that’s to give up something in three and four, Rudy will have a good grasp of deciding that.”

Is Gateway a difficult track to find a setup that your driver is happy with?

“The combination of having two distinct corners and practicing in the day and racing at night make Gateway one of the toughest races on the schedule for driver, crew chief and crew to gel. It’s like Pocono where you can’t have the perfect setup for all the corners, you have to pick which corner you want to make better. The other challenge will be practicing during the day when it’s 95 degrees and then racing at night when it’s 70 degrees. I have most of the same guys on my team that we led the most laps with Erik (Jones) in 2015 and again with William (Byron) last year and don’t have a win to show for it, so we are really motivated to get the win this year.”

KBM-24: The No. 4 JBL Tundra team will unload KBM-24 for Saturday night’s Drivin’ for Linemen 200 at Gateway Motorsports Park. It will be the first start for the Tundra this season, but it has earned two victories and 525 laps led in eight career starts. Erik Jones won the Toyota’s debut at Phoenix International Raceway in November of 2014 and William Byron took it to victory lane at New Hampshire Motor Speedway last September.

Ryan “Rudy” Fugle begins his fourth season as a crew chief at KBM and sixth overall with the organization.  The New York native has guided his team to an Owner’s championship in all three of his seasons (2013, 2015 & 2016) atop the pit box at KBM, including a combined Owner’s/Driver’s Championship with Erik Jones in 2015. His drivers have combined for 18 wins, 12 poles and 38 top-five finishes across his 75 races calling the shots for the organization. Under his tutelage last season, William Byron collected a Truck Series’ rookie record seven wins while leading the No. 9 Tundra team to KBM’s fourth consecutive and fifth overall Owner’s championship.

Fugle’s NCWTS drivers have posted an average starting position of 2.0, 131 laps led and average finish of 20.0 across two starts at the 1.25-mile track. William Byron led a race-high 47 laps in last year’s race, but was relegated to a 17th-place finish after a late accident.

TIL NEXTTIME, I AM STILL WORKING ON MY REDNECK!