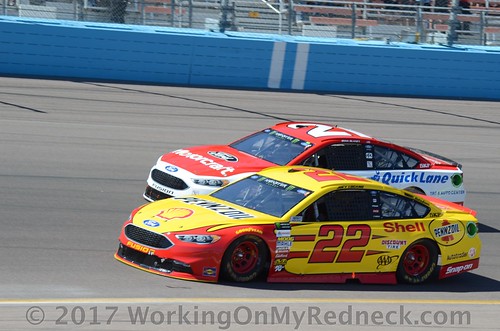 Recap: Brad Keselowski and the No. 2 Wurth Ford Fusion team seem to be in the midst of an unlucky streak as they finished 38th in Sunday’s AAA 400 Drive For Autism at Dover International Speedway (DIS) following another incident not of their own making. A solid qualifying effort on Friday afternoon saw Keselowski begin the race from the eighth position, but he did not stay there long. While many other competitors were struggling with their cars being too loose, a tight-handling condition on the No. 2 Ford allowed Keselowski to make up considerable ground on restarts and he was able to race his way into the top five by lap 23. On the third restart of the day at lap 66, Keselowski was again making a strong move around the No. 41 of Kurt Busch for the third position when Busch lost control of his Ford, making contact with Keselowski that put the Wurth Ford into the wall. The damage was too significant to repair inside the five minute time limit to do so and Paul Wolfe made the decision to retire by telling his driver to take his car to the garage.

Quote: “It really stinks to DNF (Did Not Finish) two weeks in a row, but to make it worse I think we had cars capable of competing for the win both weeks. It’s unfortunate that we haven’t been able to show the speed in our Ford Fusions. The most important thing, though, is that we indeed have speed. The Wurth Ford was really good on restarts today and we were able to make some good moves to work our way into the top five. Unfortunately it just wasn’t meant to be today.”

Recap:  Joey Logano started 24th and finished 25th on Sunday afternoon in the No. 22 Shell-Pennzoil Ford Fusion at Dover International Speedway. When the race began, Logano quickly raced inside the top-20, while reporting a loose handling Ford Fusion. When the first caution flag was displayed at lap 20, crew chief Todd Gordon called for a two-tire stop to gain the team valuable track position. Logano was able to maintain inside the top-10 until lap 46 when the team again pitted, this time for four tires and additional adjustments to the Shell-Pennzoil Ford. Logano later reported the car was good on longer runs and Gordon’s adjustments were working to the drivers liking. Unfortunately, the 22 team’s day turned south on lap 193 as Logano hit the wall following a right front tire failure. From there, the Shell-Pennzoil crew would battle back from the 32nd position, making pit stops to adjust camber, toe, chassis and other adjustments and repairs to the No. 22 Ford. The adjustments would serve to give Logano a car that could continue to make incremental gains, ultimately battling back for a 25th place finish.

Quote: “Unfortunately we had another tough day with our Shell-Pennzoil Ford. I’m proud of the effort that everyone on our team put in repairing the car and continuing to fight on. It’s disappointing when you have a day like today, but this team doesn’t give up and we’ll head to Pocono and keep fighting.”