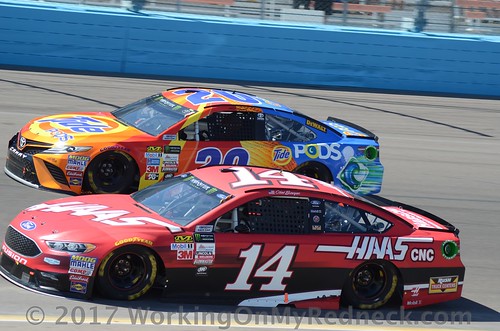 ● Bowyer began moving up through the field, but noted that his car was tight on the throttle and loose into the corners.

● Bowyer ran as high as fourth until lap 97 when his Haas Automation crew noticed a mechanical issue while Bowyer was pitting under caution.

● Bowyer brought his Ford Fusion to the garage for repairs, putting him 18 laps down.

● Bowyer earned back another lap to run only 16 laps down at the conclusion of the stage.

● Bowyer ran in and around the middle of the field throughout the final stage.

● Bowyer earned one more lap back to run only 15 laps down at the conclusion of the race.

● The race finished in overtime, going six laps past its scheduled 400-lap distance.

● There were 15 caution periods for a total of 72 laps, including the final lap.

● Jimmie Johnson won the AAA 400 Drive for Autism to score his 83rd career Monster Energy NASCAR Cup Series victory, tying NASCAR Hall of Famer Cale Yarborough for sixth on the all-time series win list. It was also Johnson’s third win of the season and his 11th at Dover.

“The guys worked their tails off this week on our Haas Automation Ford. We were a force to be reckoned with. We started 22nd and moved our way up to the top-five. We were doing great and exactly what we needed to do to get stage points. If we keep doing that and working together as a team, we’ll get back up there where we need to be.”