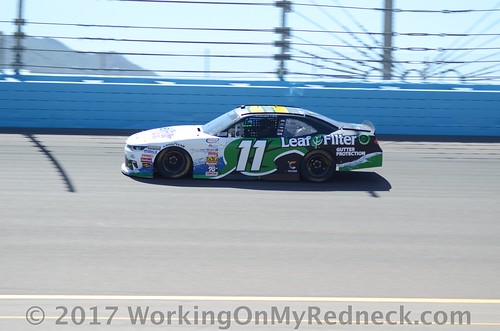 Kaulig Racing driver Blake Koch earned a track-best starting spot of 16th at Dover International Speedway on Saturday morning, but his quest for a top-10 finish was foiled by an incident on Lap 135. Running as high as ninth during the 200-lap event, Koch and the team had found their groove before damage to the car’s steering took them out of the OneMain Financial 200 early.

“The two guys in front of me got loose and I had to check up, causing the spin,” said Koch.  “The slight contact to the inside wall did more damage than we thought. I think what makes it worse is that this is my favorite track and we had such a good car. We had a rough start as we struggled in practice yesterday, but made some awesome adjustments overnight and I believe we could have finished in the top-five. I can’t thank my LeafFilter Gutter Protection team enough for all of their hard work and hate this result for them.”

The team made several chassis, shock and spring adjustments throughout Friday’s two practice sessions to help the handling of the No. 11 LeafFilter Gutter Protection Chevy. Having finished the sessions 21st and 19th, respectively, the team went to work to improve the car before Saturday’s qualifying session.

As soon as Koch completed a qualifying lap, he reported that the car handled significantly better. He earned a 16th-place starting spot for the 200-lap race, his best at Dover.

The first 60-lap stage saw four caution flags before the stage ended on Lap 60. Koch ended the stage 11th and reported throughout the stage that he started out a little free when he ran the bottom, but tightened up as the run went on. Crew chief Chris Rice brought Koch down pit road during the race’s fifth caution on Lap 63 for fresh tires, fuel, air pressure and track bar adjustments. Koch started Stage 2 from the 14th position on Lap 67.

The caution flew for the sixth time on Lap 91 as Koch ran 13th. He restarted there on Lap 99 and had made his way up to 11th with 15 to go in Stage 2. The caution flew again on Lap 111, putting Koch ninth for the restart with five to go in the stage. Koch maintained the ninth position to finish Stage 2 with two stage points.

The team pitted after the caution flag flew to end the previous stage for fresh tires, fuel, air pressure and track bar adjustments. Because of differing pit strategy from other drivers, Koch restarted 20th on Lap 127. He made his way up to the 18th position and held his line until Lap 135 when he was forced to check up, causing his No. 11 machine to spin down the banking, nose-first into the inside wall.

Koch could not get the car to steer off the banking, forcing him to retire from the race early. He would be scored 32nd when the race ended on Lap 200.

Koch is scored 11th in the NXS Championship standings after Saturday’s race at Dover International Speedway. Koch and the No. 11 LeafFilter Gutter Protection team will be back on track Saturday, June 10th at Pocono Raceway.