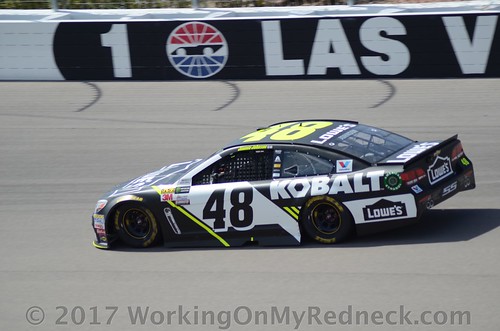 you ever wondered how concerned is Jimmie Johnson about the major changes coming to the Monster Energy NASCAR Cup Series schedule in 2018?

The short answer: not at all – yet.

Johnson has won all of his record-tying seven series championships under a 10-race playoff format. During his phenomenal run from 2006 through 2016, there have been only nominal and incremental changes where the venues for the final 10 events are concerned.

In 2018, however, the differences will be dramatic. Las Vegas Motor Speedway, which has never been part of the playoff, will open the postseason next year. Richmond, the host site for the traditional regular-season cutoff race, moves into the playoff in the second spot.

The third event, the elimination race at Charlotte Motor Speedway, will move from the oval to the oval/road course combination at track.  This new addition at Charlotte can be considered  “roval”, and will have been used for a Monster Energy NASCAR Cup Series race.

Other than the change at Charlotte, however, Johnson hasn’t thought much about the 2018 schedule and the changes to a 10-race playoff that, historically, has been right in his wheelhouse.

“Were there big changes besides the roval?” Johnson asked during his Friday media availability prior to Sunday’s AAA 400 Drive for Autism at Dover (1 p.m. ET on FS1). “You can tell I’ve been paying attention. I don’t care where they are or what we do. I’m ready to race, and I think this team can win regardless of where those events are held.

“I think the roval stands out the most. That’s the biggest change, in my opinion. We’ll take it as it comes. And I guess I’ve just been focused on this year and what we have going on.”

From an unselfish standpoint, Johnson is all for injecting variety into the makeup of the playoffs.

“I know that our sport is going through a lot of change,” he said. “So I’m not surprised. I feel like there’s a lot of excitement with other forms of sports due to the fact that playoff events change and move around and locations change.

So, in driver council meetings that I’ve been a part of and conversations that have taken place, I’ve kind of sensed that change was coming and I’ve been for it. I’ve been for it mainly because of the excitement it can bring to the fans in our sport and much less about how it pertains to the No. 48 car.

From a selfish standpoint, Johnson has a completely different point of view.

“If I could have a voice I would say the 10 playoff races were all right here (Dover), and that would benefit the No. 48 the most,” he quipped.

Small wonder. In Sunday’s AAA 400 Drive for Autism, Johnson will be trying to win his 11th Cup race at the Monster Mile.