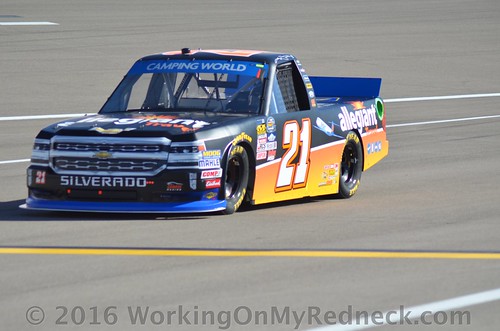 Veteran Johnny Sauter proved once again that the combination of guile and clean air trumped youthful enthusiasm and superior tires.

Despite racing on tires that were 54 laps older than those of his closest pursuer, 18-year-old Gallagher Motorsports Racing teammate, Sauter got 82 laps out of his last tank of fuel at Dover International Speedway and held on to win Friday’s Bar Harbor 200 presented by Sea Watch International.

The defending NASCAR Camping World Truck Series champion and current series leader finished .270 seconds ahead of Grala, a Georgia Tech-bound engineering student who had received his high school diploma before the race.

For practical purposes, the outcome turned on crew chief Joe Shear Jr.’s decision to bring the 39-year-old Sauter to the pits under caution on Lap 118 of 200, after NASCAR Next member Todd Gilliland ended an impressive series debut performance with a brush with the outside wall to bring out the yellow.

“Joe Shear – what a call that was to try to make it on fuel!” Sauter said afterwards. “We knew that we’d have to make a strategy play, because you just can’t pass. It wasn’t our best-handling truck, but we were able to get a win with it.”

After a restart on Lap 122, Sauter moved to the front of the group of trucks that had made pits stops on Lap 118. As green-flag pit stops cycled through late in the race. Sauter moved to the lead, and he maintained the top spot after caution flew for the eighth and final caution when the left front tire on polesitter Chase Briscoe’s Ford rolled free after the jack dropped prematurely during a green-flag stop.

From that point on, Sauter hugged the bottom and kept Grala in dirty air. The victory, which followed three straight second-place finishes, was Sauter’s first of the season, his first at the Monster Mile and the 14th of his career.

“Johnny Sauter is a veteran and a champion for a reason,” said Grala, who took plenty of solace from his runner-up finish.

The winner of the season-opening event at Daytona International Speedway, Grala already had punched his ticket to the Truck Series playoffs.

“This was a big day for me, not only for my school life but for my racing life,” Grala said.

Christopher Bell fell out early after cutting a left rear tire and trying to nurse it to the end of the first 45-lap stage, which Ryan Truex won, leading every lap from the second starting position. Bell hit the wall, finished 25th and dropped 52 points behind Sauter in the series standings.

Grant Enfinger ran third, followed by Ben Rhodes, who led a race-high 71 laps but had to pit for fuel under green on Lap 165 and ran out of time trying to work his way back to the front.

Check out the unofficial results of the Bar Harbor 200.