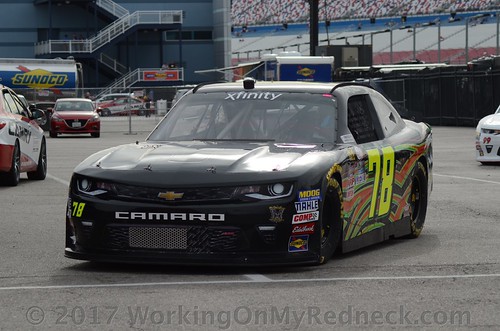 For Saturday’s XFINITY Series Dash4Cash race, the Mooresville, N.C.-based team welcomes Jordan Anderson aboard who will pilot the No. 78 Chevrolet Camaro in the 200-lap slugfest. A mainstay in the NASCAR Camping World Truck Series (NCWTS), the Columbia, S.C.-native brings a fresh perspective to the team and is eager to produce a strong result.

Team principal B.J. McLeod who earned a solid effort last weekend at Charlotte (N.C.) Motor Speedway will maintain his duties in the No. 8 Chevrolet Camaro. The sophomore XFINITY Series driver is also a big fan of Dover International Speedway, site of one of his best finishes during the 2016 NASCAR XFINITY Series (NXS) season.

“We are looking forward to Dover this weekend,” said McLeod. “It’s a neat place. It’s a fast-short track where you really must get up the wheel and drive the car. Last year, our cars were pretty good and I’m hoping that we can unload on Friday and be in similar shape.

“We’re also thankful to Jordan Anderson apart of the team this weekend. He is the true definition of a hard-core racer and I think he’s going to do us a good job. If he can complete all the laps and see the checkered flag, we couldn’t ask for anything more.”

McLeod, a native of Wauchula, Fla. will make his fourth career-start at Dover. In his three previous starts at the 1.0-mile concrete oval, he earned a track-best of 19th last May.

Starr, the Houston, Tex. native is set for his fourth career XFINITY Series showing at Dover. In 2015, he earned a track-best finish of 13th after starting 24th.

For Dover, B.J. McLeod Motorsports is proud to welcome the additional support of The RC Group, ICE-FROST and @CouchCrewChief who will serve as associate marketing partners for the team’s 44th career XFINITY Series race.