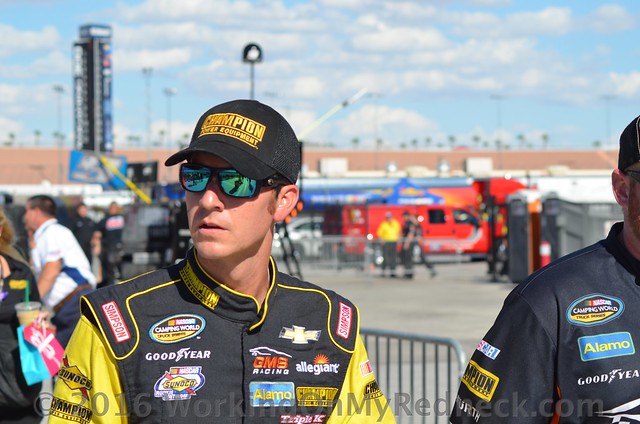 Team Information:
Driver Point Standings: 7th
Owner Point Standings: 9th
Sunoco Rookie of the Year Contender
Sounding Off – Grant Enfinger:
“I’m pumped about getting to some new tracks this year, and I’m really excited about getting to Dover. It’s a tough, high-banked, fast-paced mile that demands respect as a driver, and requires some finesses. Some drivers have even compared coming out of the corners, onto the backstretch, as something similar to a rollercoaster, so I guess they don’t call it the ‘Monster Mile’ for nothing. In 2016, I was at the track for the first time as a mechanic, so being behind the wheel this time around will be an experience, and I can’t wait.”
News & Notes:
Enfinger’s Career NCWTS stats:
Dover Stages:
Race Information:
Date: Friday, June 2
Time: 5:30pm ET on FOX Sports 1
Track: 1-mile concrete oval
Distance: 200 Laps, 200 Miles
About Ride Television Network, Inc.
Ride Television Network, Inc. is a privately held corporation based in Fort Worth, Texas. The company was formed in 2011 for the purpose of launching a 24-hour, high definition, television network. RIDE TV launched on October 1, 2014 in the United States and is now available internationally. The network features high-quality television programming showcasing both English and Western disciplines and lifestyles and includes live events, reality shows, talk shows, children’s programming, documentaries and more. For more information about RIDE TV, please visit www.ridetv.com.
About Curb Records:
Celebrating over 50 years in the entertainment business, Curb Records is one of the world’s leading independent music companies. Owned and operated under The Curb Group by Mike Curb since 1962, Curb Records has achieved 433 number one records, over 1,500 hundred Top Ten records and charted over 4,500 total records. Today’s roster includes some of the top names in Country, Christian and Pop/Rock music. Curb Records has produced over 100 Billboard awards and achievements and was recently honored as the 2015 Mediabase Gold Label of The Year. For more information visit: Curb.com.
About ThorSport Racing:
ThorSport Racing, based in Sandusky, Ohio, is the longest-tenured NASCAR Camping World Truck Series team. ThorSport Racing, which has competed in the NCWTS since 1996, will run the No. 88 Menards Toyota Tundra driven by two-time NCWTS drivers’ champion Matt Crafton, the No. 13 JEGS/RIDE TV Toyota Tundra driven by Cody Coughlin, the No. 27 Toyota Tundra driven by Ben Rhodes, and the No. 98 RIDE TV/Champion Power Equipment/Jive Communications/Curb Records Toyota Tundra driven by Grant Enfinger. For more information visit www.ThorSport.com.
TIL NEXT TIME, I AM STILL WORKING ON MY REDNECK!