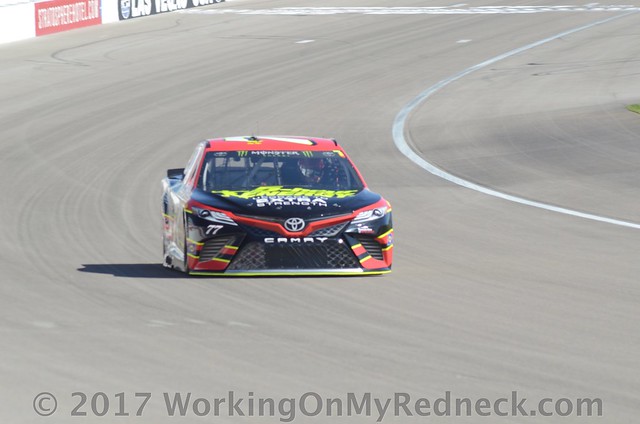 Learning from the negatives and building on the positives just one-third of the way into Erik Jones’ rookie season in NASCAR’s premier series has created the momentum he carries into Sunday’s AAA 400 Drive for Autism at Dover (Del.) International Speedway.

Jones and Furniture Row Racing’s No. 77 5-hour ENERGY Extra Strength Toyota Camry team are coming off season-best performances in both qualifying (fifth) and finishing (seventh) positions from last Sunday’s Coca-Cola 600 at Charlotte Motor Speedway. Jones finished 13th in the first 100-lap stage, then ran in the top 10 for the majority of the race. He earned 13 additional championship points for finishes of eighth, fifth, and seventh, respectively, in the race’s final three 100-lap stages.

“Qualifying fifth and finishing seventh at Charlotte was what the 5-hour ENERGY team needed after some tough races recently and it’s definitely something to build on,” said Jones. “We just needed a good, solid finish to remind ourselves that we have all the pieces; it’s just a matter of getting everything in sync and working together. We can now take that momentum to Dover and, hopefully, have another strong weekend.”

The Byron, Mich., native has four previous starts at the high-banked 1-mile Dover International Speedway. He qualified second, led 50 laps and finished third in his track debut May 29, 2015 in the NASCAR Camping World Truck Series. The next day he started sixth, led 70 laps and finished ninth in the NASCAR XFINITY Series race. In two XFINITY Series races in 2016, Jones qualified third and led 76 laps en route to victory on May 14 and, on Oct. 1, qualified on the pole and led 54 laps before finishing 16th.

In all, Jones qualified no worse than sixth at The Monster Mile, has one victory, another top-five and a third top-10 finish, earned one pole position and led a total of 250 laps.

“Dover is a track I really enjoy and I’ve had it marked on the calendar since the beginning of the year,” said Jones. “We’ve always been fast there and it’s a track I’ve always felt pretty comfortable on. I had some success early in my career at high-banked tracks like Winchester (Ind.) Speedway so that’s helped me at Dover. But they call it The Monster Mile for a reason so it’s a place where you have to be at your best all day.”

Jones is now 18th in the 2017 NASCAR Cup Series point standings after 12 races, 10 points behind Ryan Newman for 17th and 32 behind Matt Kenseth for 15th. He is currently second in the Sunoco Rookie of the Year point standings, 10 behind leader Daniel Suarez and five ahead of Ty Dillon in third.

The Toyotas of Jones and Furniture Row Racing teammate, Martin Truex, Jr., driver of the No. 78 Furniture Row/Denver Mattress Camry and the current NASCAR Cup Series point leader, will carry Autism Delaware decals on their B-posts this weekend.  Autism Delaware is a leader in the First State on autism awareness since its founding in 1998. This is the 11th consecutive year Dover International Speedway’s spring NASCAR race has had a tie-in with the cause of autism awareness.

The 400-lap, 400-mile AAA 400 Drive for Autism will consist of three stages of 120/120/160 laps (laps 120/240/400). In each of the first two stages, drivers finishing in the top 10 will receive championship points (10 to 1) with the winner receiving one playoff point. The overall race winner will earn 40 championship points and five playoff points. Playoff points accumulated during the season will carry through the first three of the four playoff rounds.