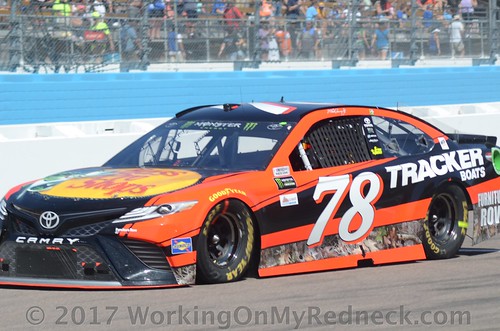 Martin Truex Jr. said that not winning Sunday night’s Coca-Cola 600 had a stinging effect. But there was a silver lining for the Furniture Row Racing driver with his third-place outcome in NASCAR’s longest race (400 laps, 600 miles).

He took over the NASCAR Cup Series driver points lead, thanks to an additional 26 points he accrued for finishing second, first and fourth in the three stages leading up to the final 100-lap shootout.

Along with being the new points leader after 12 races, Truex is tied for most race wins (2), and is the sole leader in the following categories — driver points, stage wins (6), stage points (157), playoff bonus points (16) and laps led (769).

And for the third consecutive Coca-Cola 600 at Charlotte Motor Speedway, Truex led the most laps —  233 circuits in his No. 78 Bass Pro Shops/TRACKER Boats Toyota. He is only the second driver to lead the most laps in three straight Coca-Cola 600 races. Last year he led a record 392 of 400 laps and the year before he led 131 for a three race total of 756.

“We did everything but win,” said Truex after scoring his fourth top-five and eighth top-10 finish of the season. “As we always say, the fastest car doesn’t always win. And that was the case tonight. That’s two out of the last three years that we lost this race on fuel mileage. Same thing two years ago. But we got the win last year.”

Truex, who started eighth and led seven different times, appeared to have the dominating car as the race was winding down. He lost the lead when a few cars took a chance on fuel mileage by not pitting late in the race. He eventually got close to the leader, but the gamble paid off for race winner Austin Dillon, who scored his first career Cup victory.

“I definitely burned myself up trying to get through traffic,” said Truex. “Our car was definitely looser that last run. I lost quite a bit of time in traffic. Just too loose in general. We made a little mistake in that last adjustment, and that cost us. Not winning this race stings a little. This Bass Pro Shops/TRACKER Boats Toyota did a heck of a job today. I drove my butt off, but it wasn’t to be tonight.”

Truex added, “We just missed it a little bit tonight on our last adjustment. I think if not for that we probably could have gotten the 3 (Austin Dillon). And then lapped traffic is just so tough here. There are a few guys out there that you don’t ever know where they’re going to be when you get to the corner and it cost you so much time trying to pass them. Ultimately that’s what got us.”

The race had 23 lead changes among 10 drivers and there were nine cautions for 53 laps. Rain also forced NASCAR to red flag the race for 1 hour, 40 minutes.