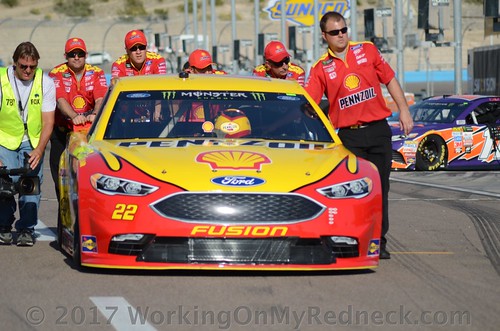 Recap: Brad Keselowski and the No. 2 Miller Lite Ford Fusion team had an uncharacteristic 39th-place finish in Sunday night’s Coca-Cola 600 at Charlotte Motor Speedway after an incident on the 20th lap of the longest race of the year. After starting the race from the 10th position, Keselowski appeared to have one of the strongest cars on track as he quickly made his way up near the top five in the first 10 laps. Unfortunately, on lap 20, he was involved in an incident with the No. 24 of Chase Elliott after Elliott ran over debris off the No. 33 of Jeffrey Earnhardt. The debris appeared to knock the oil line off the No. 24 car, which kept Keselowski from being able to dodge the damaged machine. The Miller Lite Ford suffered severe damage as well and was not able to continue.

Quote: “Somebody broke and there was just oil everywhere and I couldn’t turn. I ran into the back of Chase. Somebody broke in front of him, then he ran over what they broke, and then he broke, so there were two cars broken in front of me and just oil everywhere. You couldn’t stop and turn. You couldn’t do anything. It’s a real bummer four our team. We had a really fast Miller Lite Ford and I think we had a shot at winning tonight, but that’s how it goes.”

Recap:  Joey Logano and the No. 22 Shell-Pennzoil Ford Fusion team started 23rd and finished 21st in Sunday night’s Coca-Cola 600 at Charlotte Motor Speedway. Logano and the team struggled to find speed for most of the weekend, despite running the 10th fastest time in final practice on Saturday afternoon; those struggles continued in the early stages of the 600-mile event Sunday. On the opening run of the race, Logano battled a car that was tight and it built tighter throughout the run. Crew chief Todd Gordon called for air pressure and wedge adjustments on the first stop of the night, and then again on the second stop of the race setting up the run to the conclusion of the first stage. Those changes proved to give Logano a car that he could compete with, despite being trapped in dirty air.  Logano found himself in the 19th position at the conclusion of stage 1. Throughout stage 2, the team steadily moved forward, continuing to work on the handling of the car. Even following the delay for rain, Logano was able to work his way toward the top-10 reaching the 11th position at the conclusion of the second stage. During the third stage of the race, Logano began to struggle with a loose car but managed to keep it around the top-15 through the conclusion of the stage. In the closing laps, as many of the leaders pitted, the No. 22 Shell-Pennzoil Ford team made a track position gamble by running long, hoping for a late race yellow. Logano cycled as high as third, and was in position for a major track position gain if the caution flag was displayed. Unfortunately, with six laps remaining the team was forced to pit dropping them to a 21st place finish.

Quote:  “It was a tough weekend for our Shell-Pennzoil team. From the time we unloaded on Thursday we struggled with not having enough speed in the car and unfortunately that carried into the race tonight. We adjusted on it but when you are battling dirty air at a place where track position is key it makes for a really long night. We’re a strong team and we’ll battle back, but we’ve got to start scoring stage points and stage wins.”