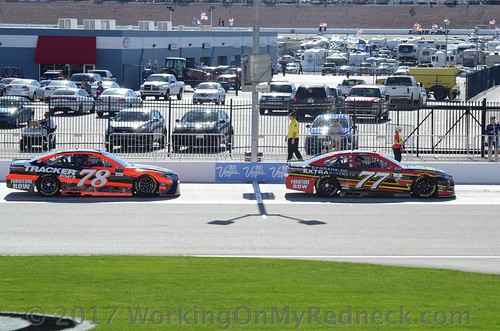 Martin Truex Jr. came close to giving Furniture Row Racing another victory in the Coca-Cola 600, but the overall picture Sunday night for the two-car race team out of Denver, Colo. provided many highlights.

The finishes by Truex (third) and teammate Erik Jones (seventh) gave Furniture Row Racing its first double top-10 result in the same race since expanding to a two-car team at the beginning of the season.

Truex, who led a race high of 233 of 400 laps at Charlotte Motor Speedway, lost the lead when a few cars took a chance on fuel mileage by not pitting late in the race. He eventually got close to the leader, but the gamble paid off for race winner Austin Dillon, who scored his first career Cup victory.

The good news for Truex is that he moved into the driver points lead, five markers ahead of Kyle Larson. He picked up an additional 24 points with stage finishes of second, first and fourth. NASCAR increased the number of stages by one since it was the longest race of the year — 400 laps, 600 miles.

Though Truex was disappointed for not winning the race, he also knew that his day could have easily come to an end before the race was 20 laps old. He did a phenomenal driving job, slipping and sliding though oil between two wrecking cars.

“I thought it was over at that point,” Truex told his crew over the radio.

But Truex, who started eighth, came on strong to lead seven different times. He also had to endure a 1 hour, 40 minute rain delay, which started on Lap 141.

“That (not winning) stings a little bit, but can’t say enough about the guys on the team and everybody in Denver,” said Truex, who has now led the most laps in three consecutive Coca-Cola 600 races. “This Bass Pro Shops Toyota did a heck of a job today. I drove my butt off, but it wasn’t to be tonight. That’s two out of the last three years that we lost this race on fuel mileage. Same thing two years ago. But we got the win last year.”

Truex added, “We just missed it a little bit tonight on our last adjustment. I think if not for that we probably could have gotten the 3 (Austin Dillon). And then lapped traffic is  just so tough here. There are a few guys out there that you don’t ever know where they’re going to be when you get to the corner and it cost you so much time trying to pass them. Ultimately that’s what got us.”

The 20-year-old Jones also secured major highlights. His seventh-place finish was a career NASCAR Cup Series high as was his qualifying effort of fifth. He was also the highest finishing rookie in the race.

Jones and the No. 77 5-hour ENERGY team had struggled of late to put together good finishes at past races but they took advantage of the Coca-Cola 600’s extra fourth stage to earn their second top-10 finish of the season. The team started fifth but suffered bad luck early when debris from a competitor’s car damaged the nose of the Furniture Row Racing Toyota Camry.

Yeoman effort by the crew on pit road took care of the damage and Jones did the same on the track, picking up 20 positions to finish the first 100-lap stage in the 13th position. From there, Jones & Company would finish Stage 2 in eighth place, Stage 3 in fifth and seventh when the checkered flag waved. The solid effort earned the team 13 additional championship points.

“We had a good 5-hour ENERGY Camry tonight,” said Jones. “I think getting that damage early put us behind the 8-ball and the car wasn’t the same the rest of the night but we have to be happy with our best finish of the season. It was good to get a solid top-10 finish because it’s definitely something to build on.

“This is what we needed after some tough races and tonight we just needed a good, solid finish. I think we were even a little bit better than the finish but the hole in the nose early kept us from ever getting the balance the same again. Furniture Row Racing is strong right now. Martin (Truex) was really strong all night. It’s cool to be a part of it and cool to drive fast race cars. It’s always fun to show up and drive cars that can contend for wins.”

Jones is now 18th in the 2017 NASCAR Cup Series point standings after 12 races. He is 10 points behind Ryan Newman for 17th and 32 behind Matt Kenseth for 15th.

The race had 23 lead changes among 10 drivers and there were nine cautions for 53 laps.