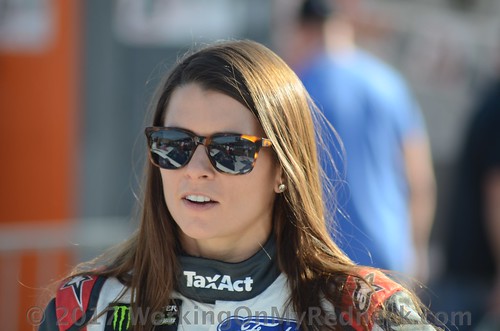 ● Patrick was running solidly inside the top-20 when the caution flag waved at lap 20 for an accident on the frontstretch. The right front of the No. 10 Code 3 Associates Ford Fusion hit a piece of debris, which caused considerable damage to the car. The team pitted twice under the caution to assess the situation and make repairs, but they were not able to fully address the damage before the field went back to green.

● Patrick restarted in the 33rd position at lap 27 and worked her way up to the 25th spot before teams started making green-flap pit stops. In hopes of catching a caution to make further repairs to the car, crew chief Billy Scott had Patrick remain on track as long as possible. She took the lead at lap 69 and led seven laps before pitting at lap 76 for tires and fuel.

● Due to the damage sustained, the team had trouble jacking the racecar up during the stop, which left Patrick a lap down to the leader when Stage 1 ended at lap 100.

● The caution flag waved due to the threat of severe weather at lap 142, and the event was red flagged for more than 90 minutes during a downpour and as NASCAR officials worked to dry the track after the storm cleared out.

● Patrick was running in the 25th position when the No. 10 Code 3 Associates Ford sustained significant right-side damage after contact with the wall in turn three. The team’s initial inspection found the tire was cut, which led to contact with the wall. The team pitted multiple times for repairs, and Patrick went down a second lap to the leader before restarting in the 29th position at lap 178.

● She was able to gain two spots in the closing laps of the stage, and the team pitted for tires, fuel and air pressure and wedge adjustments.

● She noted the car was a “four out of five unstable” during the first half of the stage, and the No. 10 team pitted for wedge and air pressure adjustments at lap 249.

● Patrick continued to battle a loose-handling condition in the second half of the stage, so the team made a significant wedge adjustment when they pitted again at lap 295.

● Less than 30 laps into the final stage, Patrick once again cut a right-front tire and made contact with the wall in turn three. The team pitted twice for tires and to make repairs to the No. 10 Code 3 Associates Ford Fusion. Patrick restarted in the 24th position, three laps down to the leader, when the field went back to green at lap 333.

● Patrick soldiered along for the remainder of the race and took the checkered flag in the 25th position.

● Patrick earned 12 points in Sunday night’s race at Charlotte Motor Speedway, which puts her at 127 total points for the season thus far. She is ranked 32nd in the driver point standings.

“I’m not sure where to even begin with tonight’s race. I mean, damage from debris and two cut tires – it was just a rough night all around for the No. 10 Code 3 Associates Ford team. We struggled with the handling for a good bit of the night, but it was actually a lot better the last few runs. Unfortunately, we weren’t in a position to gain much at the end, but I have to give credit to my team for working hard all night and not ever giving up.”