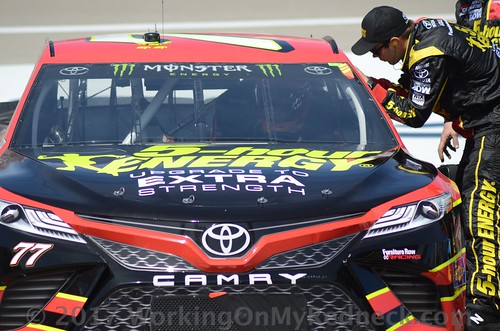 Erik Jones has his mind set on giving himself an early 21st birthday present this Memorial Day Weekend.

The driver of Furniture Row Racing’s No. 77 5-hour ENERGY Toyota Camry turns 21 on Tuesday, May 30, just two days after the Coca-Cola 600 at Charlotte Motor Speedway. Jones knows the celebration if he’s able to accomplish his goal would be even more special because of the true American hero he will be paying tribute to during NASCAR’s longest race.

Jones and No. 77 5-hour ENERGY Toyota team will honor the late Lance Cpl. Matthias N. Hanson as part of NASCAR’s “600 Miles of Remembrance” program. Hanson, of Buffalo, Ky., was assigned to the 3rd Batallion, 6th Marine Regiment, 2nd Marine Division, II Marine Expeditionary Force based at Camp Lejeune, N.C. Born Jan. 26, 1990 at the U.S. Army Hospital in Nuremberg, Germany, Hanson was a 2008 graduate of LaRue County (Ky.) High School where he was a member of the varsity football team and the Technology Student Association. He died Feb. 21, 2010 while supporting combat operations in Helmand Province, Afghanistan.

“It’s a great privilege for me and the entire 5-hour ENERGY team to honor the memory of Lance Cpl. Hanson during the Memorial Day Weekend,” said Jones. “He and every other member of the U.S. military – past, present, and future — are the real heroes of our country. Winning the 600 would be a dream come true, especially since it would be my first Cup Series win, but doing so while paying tribute to Lance Cpl. Hanson would be an unbelievable honor.”

The Byron, Mich., native has five previous starts at the 1.5-mile Charlotte Motor Speedway. He qualified and finished second in his track debut May 15, 2015 in the NASCAR Camping World Truck Series, his lone race in the series. In four NASCAR XFINITY Series races (2015 and 2016), he earned three top-five qualifying spots, including a pole in May 2015, and two top-five finishes, including second in October 2015.

Jones is currently 19th in the 2017 NASCAR Cup Series driver standings. His 217 points ties him with Daniel Suarez and puts him 16 points behind Matt Kenseth for 18th and 29 points behind Kurt Busch for 15th.

Jones is third in the Sunoco Rookie of the Year standings, three points behind Ty Dillon and 15 behind Suarez.

The 400-lap, 600-mile Coca-Cola 600 will consist of four stages of 100/100/100/100 laps (laps 100/200/300/400). In each of the first three stages, drivers finishing in the top-10 will receive championship points (10 to 1) with the winner receiving one playoff point. The overall race winner will earn 40 championship points and five playoff points. Playoff points accumulated during the season will carry through the first three of the four playoff rounds.

Sunday’s race will air live beginning at 6 p.m. ET on the Fox network, SiriusXM 90 and PRN. Qualifying (multi-car, three rounds) is scheduled for Thursday at 7 p.m. ET on FS1.