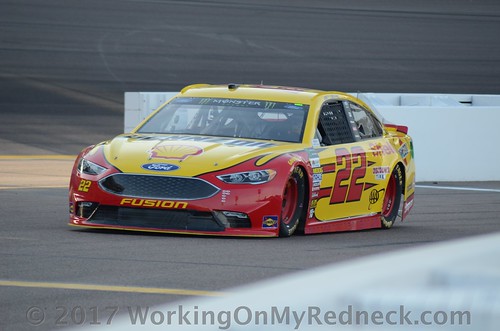 Recap: Brad Keselowski and the No. 2 Miller Lite Ford Fusion team started seventh and finished ninth in Saturday night’s NASCAR All-Star Race at Charlotte Motor Speedway. The 2012 Monster Energy NASCAR Cup Series champion fought a loose racecar during the first 20-lap segment while having a fierce battle with the No. 41 of Kurt Busch and the No. 20 of Matt Kenseth in the opening laps. Despite the handling condition, he was able to finish fifth in the first stage. The handling on Miller Lite machine was improved during the second stage of the event after a significant air pressure adjustment during the break, and Keselowski again grabbed a top 10 finish in the second stage after crossing the finish line in the seventh position. After electing to place the softer, optional Goodyear radials on the Ford, it was discovered that lug nuts were left loose during the pit stop, forcing Keselowski to come back down pit road to tighten the lug nuts. Crew chief Paul Wolfe called him back down pit road again just before the race resumed, removing the option tires and replacing them with the primary tires, in hopes of saving them after having to restart in the rear of the field. However, NASCAR ruled that the option tires could not be used again once they had been placed on the car, forcing Keselowski to run the rest of the event on his last set of primary tires. The stage winners and the best average finishing position of the first three stages set the 10-driver field that were able to run for the $1 million prize. Keselowski qualified after having the eighth best finishing position. After not pitting prior to the final, 10-lap stage, Keselowski restarted from the lead. He was forced three wide on the start and nearly spun out driving into turn 1 before a great save allowed him to finish in the ninth position.

Quote:  “Definitely a tough finish tonight for the No. 2 Miller Lite Ford. We had loose lug nuts after the second stage and having to come back down pit road to tighten those definitely altered our strategy. We just have to regroup this coming week and be better for the 600.”

Recap: Joey Logano started 12th and finished eighth in the No. 22 Shell-Pennzoil Ford Fusion in Saturday’s NASCAR All-Star Race at Charlotte Motor Speedway. The No. 22 team entered the event with only six laps of practice after a brake issue sidelined the team for the majority of Friday’s single practice session. When the green flag fell to start the first stage, Logano battled a car that was described as “unpredictable and inconsistent” fighting both tight and loose conditions from the center of the turn and on exit. At the conclusion of the first stage, crew chief Todd Gordon called for major air pressure adjustments, trying to take a swing at the cars handling. As the second stage progressed, the handling improved and the car became more predictable for Logano, transitioning to loose on corner entry and tight from the center off. At the conclusion of the second stage, Logano and company found themselves in the 12th position. Knowing that they needed to gain positions if they hoped to advance to the final stage of 10, Gordon elected to put the softer, option tires on. Logano rallied for a seventh place finish in the third stage, providing just enough gain to make the final 10 on a tie-breaker with the No. 14 Ford of Clint Bowyer. With the prospect of starting the final stage in the tenth position, Gordon opted to pit the No. 22 Shell-Pennzoil Ford and hook up to the cool-down unit, allowing the team to add tape to the nose to improve the handling for the dash to the finish. Logano battled forward, gaining two positions on a night where track position was at a premium.

Quote:  “We had to just shoot for the fence doing anything we can do to try to make our Shell/Pennzoil Ford a little faster.  It was just slow.  There are no better words for it.  I feel like we kind of got screwed up as soon as practice started and we had issues with our brakes.  We had a bad qualifying effort because of that, which set us towards the back.  We weren’t able to practice our car and it showed in the race.  We weren’t very quick at all and we couldn’t pass cars and couldn’t move around the race track.  We’ve got a little bit of work to do for next week.  I’ve got faith in our team and we will definitely make improvements for next weekend.”