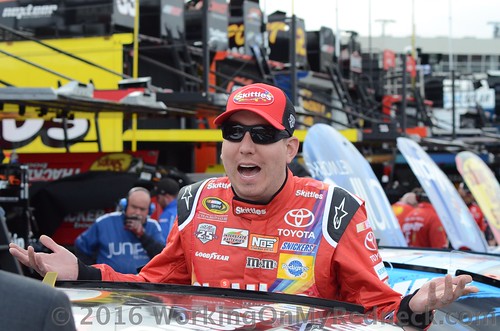 He’s only 32 years old, but Kyle Busch boasts quite the NASCAR resume.

One of the few accomplishments missing in Busch’s already illustrious career – a checkered flag in the Monster Energy All-Star Race. He’ll get the chance to achieve that feat – and earn the $1 million-prize that comes with it – under the lights on Saturday at Charlotte Motor Speedway.

Busch has won 14 races at Charlotte in the NASCAR XFINITY and NASCAR Camping World Truck Series, but never in the Monster Energy Series!

“We’ve been very lucky to check off a lot of things on my list over the last couple of years with the championship in 2015 and wins at the Brickyard 400, Martinsville, Kansas. It’s been quite a ride. I’m looking forward to this weekend, for sure, in our debut with our M&M’S Caramel car,” Busch said.

“This is always a pretty cool race and it has good atmosphere around it,” Busch said. “The crowd gets jacked up and, of course, there is nothing important on the line besides a million bucks. You just go out there and race as hard as you can.”