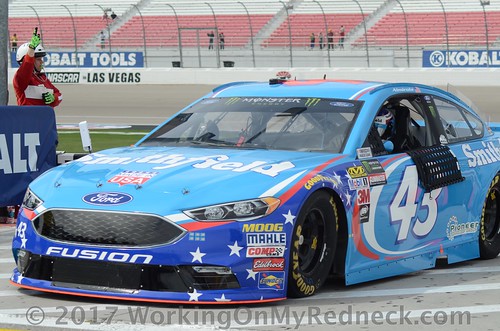 When his car slammed into Joey Logano’s on Lap 200 of last Sunday’s Monster Energy NASCAR Cup Series race at Kansas Speedway, Aric Almirola felt as if he had a sharp pain in his back.

But the worst was yet to come, as the impact lifted the rear end of Almirola’s No. 43 Ford Fusion off the pavement. The car slammed back down on the asphalt with a force that ran through Almirola’s body like a jolt of electricity.

Almirola saw the initial collision between Logano and Danica Patrick ahead of him on the track, but was powerless to miss their cars after his Ford ran through fluid on the asphalt and wouldn’t turn or slow down.

“I had no grip, and I assumed that when Danica’s car blasted the outside wall that it must have knocked the radiator, and oil and stuff got in the outside groove and it ran down the race track and I was in it, so that’s how I ended up in the wreck,” Almirola said on Friday at Charlotte Motor Speedway.

“I knew it was coming. I saw it. I braced for the wreck, and immediately when I hit Joey’s car, I felt pain in my back. It felt like somebody stuck a knife in my back, and then I realized that my car was airborne because I could see the asphalt, and when it came back down it felt like somebody took that knife and just twisted it up in my back.”

Transported from the accident scene to a local hospital, Almirola was diagnosed with a compression fracture of the T5 vertebra, an injury expected to keep him out of action for eight to twelve (8-12) weeks.

Richard Petty Motorsports has hired Regan Smith to replace Almirola in the No. 43 Ford for Saturday night’s Monster Energy All-Star Race, for which Smith must qualify through the Monster Energy Open. Beyond that, RPM has yet to announce a plan for substitute drivers.

Almirola’s absence almost surely will take him out of the championship picture, but the driver has a longer-term perspective, one that will allow him to heal completely before he returns.

“Getting back in a race car two weeks too soon is just going to add two more starts to my start column and the stat book,” Almirola said. “But if I were to get in another similar accident and not be properly healed, you’re talking about potentially being paralyzed from the belly button down, so I’m not gonna risk that.

“I’ve got a lot of baseball to play with my son and I’d like to dance with my daughter one day at her wedding, so I’m not going to risk it. Whenever the doctors clear me, I’ll be ready to get back in a race car.”

Almirola has the right attitude, racing is just racing.  Your family is so much more important than getting back into the race car to salvage the year!