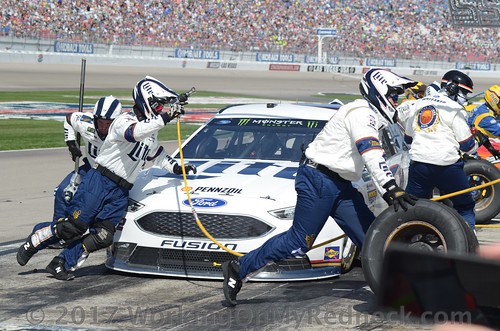 Recap: Brad Keselowski and the No. 2 Elite Support Ford Fusion team fought back from two laps down at one point to finish second in Saturday night’s Go Bowling 400 at Kansas Speedway. After uncharacteristically missing the final round of qualifying on Friday, Keselowski started the race from the 17th position. He radioed to crew chief Brian Wilson that his car was very strong to start as he tried to make his way to the front of the field. A strong restart on lap 56 saw Keselowski move from 14th to eighth in one lap. He would make his way to the fifth position by the end of the first stage to collect five bonus points. After getting trapped in the middle of the field by electing to pit on a lap 97 caution flag when others stayed out, Keselowski really began to show the strength of his Elite Support Ford as he drove from 24th to fifth in 10 laps. Unfortunately, a few laps later he radioed that he had a loose left rear wheel and had to come to pit road for four tires. After receiving his service, NASCAR penalized the 2011 Kansas winner for driving through too many pit stalls on pit entry. This dropped Keselowski to 35th in the running order, two laps down to the race leaders.  He was able to take a wave around under a lap 137 caution period to get one lap back before taking another during the break between the second and final segments to return to lead lap racing. From there Keselowski drove like a championship contender as he methodically worked his way through the field. He entered the top 10 again at lap 228 and he used several late race restarts to power his way to second before crossing the finish line. The result gives Keselowski and the No. 2 team seven top five finishes and nine top 10s in 11 Monster Energy NASCAR Cup Series starts in 2017.

Quote:  “Well, so much happened, I’m not sure I even know.  We had a really good Elite Support Ford Fusion all day and just never had a chance to show it.  Every time we started to pass cars and cycle up to the front, we had some kind of issue, which was a real bummer to not be able to showcase the strength that we had.  Towards the end we were able to get some runs and make the most of it, and I think we went from probably 20th with 100 to go to second, which was a pretty big climb in the sport.  That’s something to be proud of, but I kind of feel like I would have liked to have seen if it would have just played out normal, and I think we might have had a shot at him.”

Recap: Joey Logano started second and finished 37th in Saturday night’s Go Bowling 400 at Kansas Speedway after a lap 199 mechanical failure triggered a three car accident in turn 1. The race got off to a difficult start for the No. 22 AAA Insurance Ford team as Logano battled a loose car on the initial start, dropping him to the bottom half of the top-10 in the opening laps. To add complexity to the situation, Logano reported that he struck a piece of debris on the fifth lap of the event, which caused damage to the lower nose and splitter section of the Fusion. Team Penske competition director Travis Geisler, who was tasked with calling race strategy for the team, began making a plan to both work on the handling of the car and repair the damage on the AAA Insurance Ford. The team pitted twice under the first caution of the event, repairing the damage and adjusting on the car. Logano would find himself battling back from the 33rd position for the remainder of the first stage and all of the second stage, finally reaching the top-10 before the second stage concluded at lap 160. The team continued to move forward, battling inside the top-10, aided in part by stellar pit stops throughout the race, gaining multiple positions on pit road on two stops, while posting single digit gains on the others. Logano reported the handling was significantly better at the conclusion of the second stage, and the team pitted for more adjustments, hoping to give the driver what he needed to battle for the win in the closing laps. Unfortunately, at lap 199, the evening ended as the No. 22 Ford broke and collected fellow Ford drivers Danica Patrick and Aric Almirola. The accident marked the second consecutive DNF for the No. 22 Ford Fusion, and the second consecutive in the May race at Kansas Speedway, a track where Logano has visited victory lane twice in his career.

Quote: “Yeah, I’m okay. Just saying a lot of prayers for Aric (Almirola) right now. A lot of us took a hard hit. Something broke on my car, I don’t know what it was. I noticed it as I was trying to go in. I tried to back it off but you’re going 215 (mph) and it’s hard to check up. The car just took a bit step sideways into the corner and I hooked Danica (Patrick). I haven’t seen a replay yet, I don’t know what happened. You can see the right-front popped (right there) and it popped. I just hope everyone is okay. I hope Aric is alright. That’s the last thing you want to see, a big hit like that for anyone. It’s unfortunate for everyone. Let’s hope that Aric is alright.”