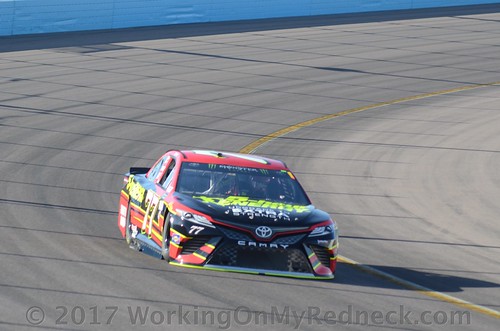 The 22nd-place finish Erik Jones and the No. 77 5-hour ENERGY team earned in Saturday night’s Go Bowling 400 at Kansas Speedway will be filed under the category of learning experience.

The 5-hour ENERGY Toyota Camry lined up 32nd, on the outside of Row 16, for the first night race of the 2017 NASCAR Cup Series season. Jones and his Furniture Row Racing team, along with 10 other teams, were not able to make a qualifying run Friday afternoon after not completing the technical inspection process. Despite the poor starting position, Jones had moved into the top 20 before halfway of the 80-lap first stage and finished in 12th.

Stage 2 opened with Jones moving into the top 10 in the first 10 laps but then spun on Lap 95 while running ninth. He restarted in 26th and worked his way back into the top 15 by Lap 132. The handling of the No. 77 Toyota Camry was very tight so adjustments were made under caution and Jones finished the stage in ninth place, picking up two valuable championship points in the process.

Continued adjustments were made on the car for the final stage which seemed to help the handling but slowed the overall performance. Jones was running 14th on Lap 199 when a red flag for a three-car incident stopped the competition for nearly 30 minutes. When racing resumed, the No. 77 Camry moved into ninth place by Lap 206 but then the handling fell off again.

Jones spun on lap 217 and then contact with the No. 13 on Lap 258 caused yet another spin. He regrouped yet again but, with just six laps remaining in the 267-lap event, had to settle for a 22nd-place finish.

“It was a tough night for the 5-hour ENERGY team all the way around,” said Jones. “It’s just one of those races you have to put behind you and look toward next week to make it better.”

Jones is tied with Daniel Suarez for 19th place in the NASCAR Cup Series driver point standings. He is 16 points behind Matt Kenseth for 18th and 29 behind Kurt Busch for 15th.

All in all it was a very frustrating evening for the young gun!