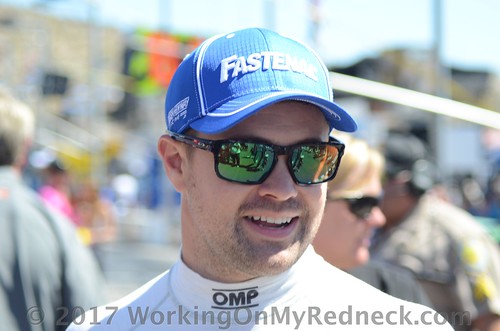 For Ricky Stenhouse Jr. and Danica Patrick, racing is never a joking matter, and their boyfriend/girlfriend relationship is all the better for it.

So when Stenhouse won last Sunday’s GEICO 500 at Talladega Superspeedway, the last thing he thought about doing was lording his triumph over Patrick, who had crashed out of the race and watched the finish from the motorhome she and Stenhouse share.

It was a breakthrough victory for Stenhouse, who won for the first time in his 158th Monster Energy NASCAR Cup Series start. Patrick is winless in 164 starts in NASCAR’s top series.

“We don’t talk about it,” Stenhouse said. “I mean, we are like every other driver. Everybody wants to win. I didn’t have bragging rights with anybody else that hasn’t won either. We just go out and try to win.”

To Patrick, the level of their commitment to racing precludes any sort of teasing or levity.

“We don’t talk about that at all. I was just simply happy for him, and my weekend sucked yet again. Actually, my weekend didn’t really suck. I had a fine race going on. It just ended early, so I had another terrible result, which has been the case so far this year. But if I was going to have one race where I didn’t get to get all the way to the finish line and either finish the race, have a good finish or win, I am really glad I had the chance to watch him win.”

When the race ended, Patrick hustled to Victory Lane to congratulate her boyfriend.

“All I did was throw my tennis shoes on and got out the door on the golf cart and went to Victory Lane and waited for him to pull in,” Patrick said. “That was a gift of an experience to be able to have in our relationship, because most of the time I would be dealing with my team and dealing with whatever I had going on.

“I had that chance to regroup. I was fresh as a daisy. I had showered and spent the afternoon standing around celebrating with him. It was a great day. But we don’t talk about that stuff.”