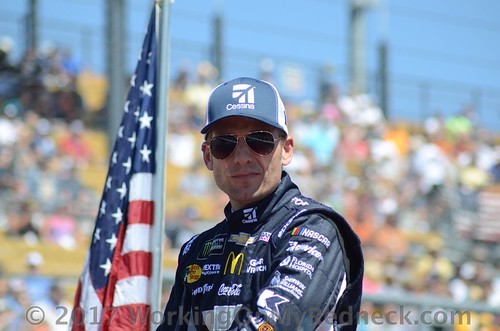 Now that Columbia, Mo., native Carl Edwards has stepped away from Monster Energy NASCAR Cup Series racing, who might be his logical replacement in the Kansas / Missouri home track rivalry at Kansas Speedway against Emporia, Kan., native son Clint Bowyer.

Joplin, Mo., product Jamie McMurray might seem the best choice, but the driver of the No. 1 Chip Ganassi Racing Chevrolet would prefer to stay under the radar.

“I feel like Carl and Clint play that up more than what I do,” McMurray said. “I grew up in Missouri, and that’s always going to be my home town, but I’ve lived in North Carolina for 20 years now, or longer than that. And, that’s my home and that’s where my kids are from.

“I would love to win at Kansas Speedway, but I want to win there because it’s where we race this weekend, not necessarily because I grew up 200 miles south of here. So, I’m going to let Clint have that ‘hometown track thing’ and I’m just going to be Jamie.”

That’s not to say McMurray does have deep ties to his home state. When Joplin was devastated by an EF-5 tornado in May 2011, McMurray was front-and-center in the relief efforts for his home town.