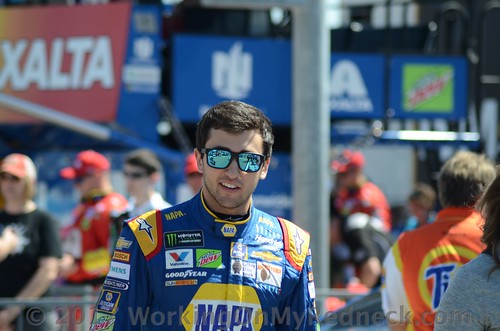 Chase Elliott ready to get back on the mile and half track at Kansas Speedway.

Most drivers would be happy to be fourth in the Monster Energy NASCAR Cup Series point standings.  Elliott, a 21-year-old rising star, is not one of those drivers.

After sitting second in the standings for five consecutive weeks, The Dawsonville, GA native has dropped to fourth in the rankings after poor finishes at Richmond (24th) and Talladega (30th).

“I feel like over the past few weeks we really haven’t performed up to our potential,” Elliott said. “As a group, I think anybody in our group would feel the same way. We’ve had some fast cars at times. But, we definitely need to execute races; even on the days that your car is not driving like you want it to.”

The No. 24 Hendrick Motorsports driver hopes that execution happens Saturday in the Go Bowling 400 at Kansas Speedway – the 11th race of the Monster Energy NASCAR Cup Series season.

In two starts at Kansas – both in his 2016 rookie season – Elliott owns finishes of ninth and 31st. He’s performed well in the three previous races at intermediate tracks this season, placing fifth at Kansas, third at Las Vegas and ninth at Texas.

Elliott, the 2014 NASCAR XFINITY Series champion, is still searching for his first Monster Energy NASCAR Cup Series win. On the season he has three top-five and six top-10 finishes as well as an average showing of 11.7.

“That execution and doing everything correctly on pit road, restarts, giving the right information, can turn a bad day into a pretty good day,” Elliott said. “So, that’s what we need to do. And we’ll try to make that happen.”

Could Elliott drive his HMS Chevy into Victory Lane this Saturday night and hoist the hardware?