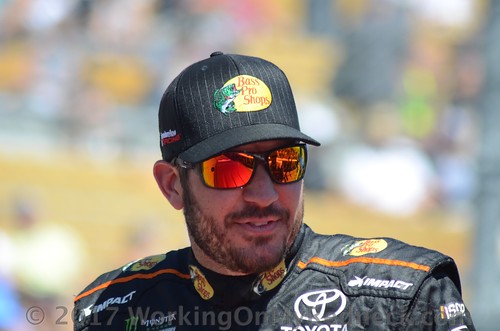 When it’s the week of the NASCAR Cup Series spring race at Kansas Speedway the questions and stories resurface about the potential victories that got away from Martin Truex Jr. on the 1.5-mile oval.

The Furniture Row Racing driver will be aiming to have a positive story to tell after Saturday night’s race in his debut run of 2017 with the Auto-Owners Insurance primary sponsorship. It will be the first of six races this season that Auto-Owners Insurance will have the primary paint scheme on Truex’s No. 78 Toyota Camry.

“No matter how many heartbreaks we had at Kansas I have all the confidence that our team will provide me with another fast race car and we will once again be competing for the win,” stated Truex. “I am excited about having our car with the Auto-Owners Insurance colors for the first time this season. We had good runs last year with the blue Auto-Owners Toyota, including a victory at the Southern 500 (Darlington, S.C.).

“Auto-Owners is also offering a fantastic sweepstakes for race fans with a number of grand prize winning options. Details are at www.autoownerstruexperience.com.”

Of the multiple heartbreaking losses for Truex at Kansas the one that probably hurt the most was at last year’s spring race when he had the field covered with a staggering seven-to-eight-second lead.

After qualifying on the pole and leading a race high of 173 laps the flukiest of flukes destroyed his chances of visiting Victory Lane.

After pitting for fresh tires on Lap 210 of 267 he reported that he had a loose wheel and the car was shaking. The culprit was a broken head bolt off the brake caliper that landed on the stud. For some unknown reason the bolt defied gravity and stayed on the top of the rounded stud which eventually caused the tire to shred. Truex had no choice but to make an unscheduled pit stop. He went from a dominating lead to finishing 14th.

“Why that tiny bolt didn’t fall off the stud was beyond me,” said Truex.

The year before Truex led a race high of 95 laps. His shot at victory was spoiled late in the race with a roll-the-dice pit stop to take fuel but not fresh tires.

“Yeah, that was another tough one to have slip away – no one’s fault, a difficult decision that didn’t play out in our favor,” said Truex, who went from a potential win to posting a ninth-place result.

Another strong performance at Kansas for Truex was in April 2012 when he led a race high of 172 laps but lost the lead late in the race and finished second. He also finished second in the 2012 fall race at Kansas.