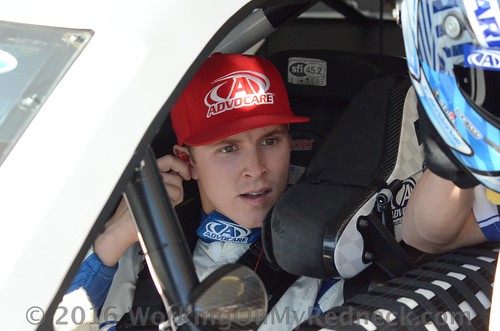 Trevor Bayne, driver of the No. 6 AdvoCare Ford Fusion, battled three-wide inside the top 10 throughout much of the final stage of Sunday afternoon’s Monster Energy NASCAR Cup Series (MENCS) race before getting collected in a multi-car incident with 20 laps remaining, severely damaging the Roush Fenway Racing Ford leading to a 37th-place finish.

“We had a really fast AdvoCare Ford this weekend,” said Bayne after the race. “We qualified well with it.  We ran up front all day and did all the things we needed to do.  One run we saved fuel and were able to lead laps, so I’m really proud of this AdvoCare team.  I hate we don’t get the result, but I had a lot of fun today.  I feel like we ran a smart race, put ourselves in position a lot, but are unable to get the result.”

Bayne started the 500-Mile event from the fifth position after advancing to the final round of knockout qualifying on Saturday afternoon. In the early laps of Stage 1 Bayne found himself shuffled outside of the top 10 after being forced four-wide. Despite the loss of track position Bayne charged forward following a Lap 16 caution period, improving 13 positions to third within six laps of the Lap 21 restart. Bayne continued to fight for position in the top five for much of the closing laps of Stage 1, ultimately taking the green and checkered flag in the fifth position.

Prior to the beginning of Stage 2, crew chief Matt Puccia told Bayne to save as much fuel as he could during the early laps of the stage in the hopes of making it to Lap 110 without having to hit pit road. As a result of this strategy, the Knoxville, Tenn. native rode around toward the back of the lead pack until a Lap 81 caution period gave crew chief Puccia another opportunity to make a strategy call as he told Bayne to stay out while several of the leaders came to pit road. This strategy call paid off as Bayne took the ensuing restart as the race leader. After pacing the field for five laps, the driver of the AdvoCare Ford was shuffled to the outside line without much drafting help, resulting in Bayne finishing the second stage in the 18th positon.

Stage 3 began with Bayne drafting back into the top five utilizing the middle lane of several rows of three-wide racing. The Roush Fenway driver continued to race for position in the top 10 until the first round of green flag pit stops commenced on Lap 149. After pitting for four tires and fuel, Bayne returned to the track in 21st but took advantage of a restart following a Lap 160 caution to rejoin the top 10.

Then, while drafting on the outside of a three-wide battle for position, a multi-car incident occurred going down the backstraightaway leaving Bayne with nowhere to go and severely damaging the nose of the AdvoCare Ford.

After quickly surveying the damage during the red flag that followed, it was determined that the AdvoCare Ford was too damaged to continue. Bayne was scored with a 37th-place finish.