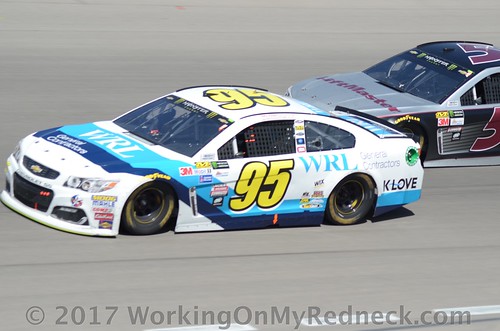 Michael McDowell and Leavine Family Racing (LFR) finished 34th in the GEICO 500 after getting tangled up in “The Big One” at Talladega Superspeedway on Sunday.

After starting the Geico 500 in 24th, McDowell quickly raced his way into the Top-20 early in the race and stayed 3-wide for the majority of the first stage. He would drop back a few spots towards the end, as the No. 95 Chevrolet SS was loose handling.

During the first caution, the team was able to adjust the No. 95 Chevy and change four tires. McDowell was then able to make it as far as the Top-10 while racing in the pack.

During the second stage, McDowell continued to run up front and stay in the draft, until he felt a vibration in the car with just under 40 laps to go in the stage. The team made their first green flag pit stop to fix a loose left rear wheel and dropped back one lap in the process.

McDowell was able to get the Lucky Dog spot at the end of the second stage when the caution flag came out, putting him back on the lead lap for the start of the final stage.

McDowell made it back in the Top-20 where he continued to race in the top lane and gained good momentum to put him back at the front of the pack. He stayed there during the majority of the final stage until a wreck on the backstretch trapped him with nowhere to go, resulting in the No. 24 car on the hood of the No. 95 Chevy. McDowell was relegated to the 34th position.

“We got tangled up on the backstretch,” said McDowell. “The contact happened a few rows in front of me. All I saw was the No. 24 coming back across the racetrack. He got spun, and ended up on the hood of the Winn-Dixie Chevrolet and unfortunately, we got just enough damage to not get it re-fired. The car wasn’t that bad, but the contact must have done something to the motor there, because I couldn’t get it fired up.”