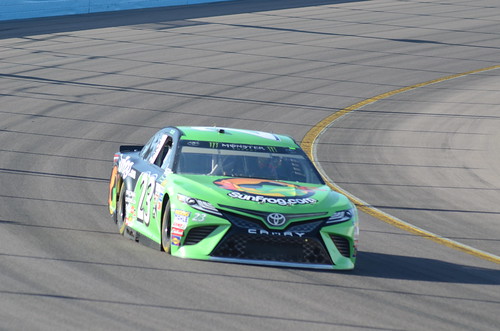 Having never competed in a restrictor plate race before, rookie driver Gray Gaulding impressed many by scoring his first career Monster Energy NASCAR Cup Series top 20 finish at Talladega Superspeedway. Corey LaJoie, also making his first start at the 2.66 mile track in Alabama, earned a solid finish of 27th in the GEICO 500.

Gray Gaulding did not race at Daytona in February, and practice for Sunday’s race at Talladega was cut short by rain. Despite his lack of superspeedway experience, however, Gaulding had a great race and finished in 20th place at Talladega in the No. 23 SunFrog Toyota Camry. “I thought it was a great first superspeedway race,” said Gaulding. “I had a blast drafting three and four wide. It was also good to get a top 20 and bring the car back without a scratch on it. I can’t wait to get to Daytona in July and back to Talladega in October.”

Corey LaJoie was at a disadvantage early in the GEICO 500 after having to visit the garage at the start of the race. However, LaJoie kept the No. 83 Dustless Blasting Toyota out of trouble throughout the wild race and finished 27th. “Unfortunately, we were behind the eight ball early having to take the car out of qualifying trim at the beginning of the race,” said LaJoie. “But we fought back, kept the car clean, and came home with another top 30 for BK Racing.”