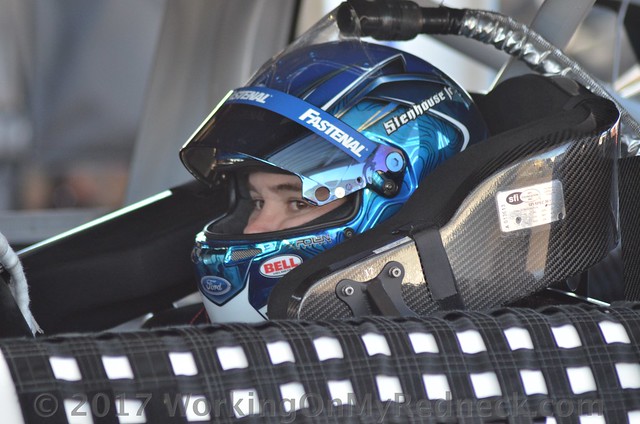 There’s no longer a goose egg in the win column next to Ricky Stenhouse Jr.’s name!

With a last-lap pass in Sunday’s GEICO 500 at Talladega Superspeedway, Stenhouse collected his first Monster Energy NASCAR Cup Series victory in his 158th start and delivered the first win for Roush Fenway Racing since Carl Edwards triumphed at Sonoma in June 2014.

“This is for all the guys at the shop–we’ve been terrible for a long time,” an exuberant Stenhouse said of the Roush renaissance. “This year, every race, we’re just getting better and better. We knew Talladega was a good race track for us. It’s been a good one in the past.

“This Fifth Third Ford was so fast today. Qualifying on the pole, got the win. Can’t say enough about the guys. It’s cool to get Jack Roush back in Victory Lane. This is cool. The closest track to my hometown (Olive Branch, Mississippi). Man, this is cool.”

Racing side-by-side with leader Kyle Busch on the restart lap after Ryan Newman’s wreck on the backstretch sent the race to overtime, Stenhouse, the polesitter, trailed by the smallest sliver of a second at the stripe but got a strong push from Jimmie Johnson and cleared Busch off Turn 2 on the final circuit.

As Jamie McMurray charged up the middle to take second place from Busch, Stenhouse held the top spot through the final two corners and the tri-oval to beat McMurray to the checkered flag by .095 seconds. Busch, in third place, trailed McMurray at the stripe by a mere .004 seconds.

Stenhouse led the first 13 laps of the race and didn’t lead again until the final lap in overtime. Busch led a race-high 48 laps, including 39 straight before Stenhouse made the winning move.

“Stenhouse got a really good run and a good push and got by us there, and then it was just about retaliation to get back on him, and I just never had enough help from behind and just never got it together,” Busch said.

“I just can’t say enough about this Skittles American Mix Camry – it was really fast. The guys at Joe Gibbs Racing did a great job and TRD (Toyota Racing Development) with everyone on this motor, it was awesome. We did all we could here today, and it’s all circumstantial on how you win these things.”

The most dramatic circumstance on Sunday occurred on the backstretch on Lap 169 of a scheduled 188.

As the tension began to build in the closing laps, a massive wreck damaged 18 of the 38 cars still running at the time. After a tap from the No. 47 Chevrolet of AJ Allmendinger, the No. 24 Chevy of Chase Elliott turned sideways across traffic on the backstretch.

The nose of Allmendinger’s car launched Elliott’s into the air, and his car landed on the hood of Joey Logano’s Ford. Among the contending cars also damaged in the wreck were those of Kevin Harvick, Brad Keselowski, Martin Truex Jr., Matt Kenseth, Trevor Bayne and Erik Jones.

After a stoppage of 26 minutes, 51 seconds to clean up the wreckage, Kyle Busch led the field to green on Lap 174 with JGR teammate Denny Hamlin beside him and Earnhardt running third.

Earnhardt quickly fell off the pace because of a loose left rear wheel and drove slowly back to pit road, losing a lap in the process. But when Landon Cassill lost power and stalled near the inside wall short of pit road on Lap 179, NASCAR called the seventh caution, and Earnhardt had his lap back as the “lucky dog.”

But Earnhardt was mired in traffic after the restart and could make up no ground after the caution that forced the overtime. He finished 22nd in his final spring race at NASCAR’s largest oval track.

Stenhouse is the 11th first-time winner at Talladega … Kyle Larson cut a tire and scraped the Turn 1 wall on Lap 17, but he soldiered on to a 12th-place finish and extended his series lead to 54 points over Truex, who was eliminated in the Lap 169 wreck … McMurray climbed to fifth in the series standings in what is rapidly becoming a banner year for Chip Ganassi Racing.

Check out the unofficial results of the GEICO 500.