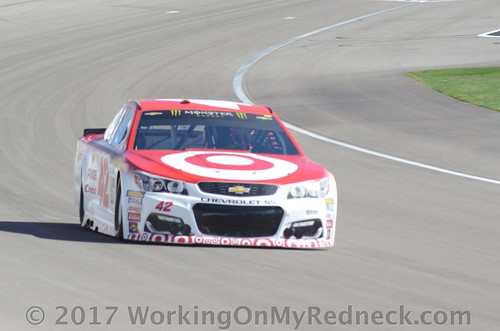 With a victory from the pole at Auto Club Speedway and four second-place finishes in the Monster Energy NASCAR Cup Series this season, the driver of the No. 42 Chip Ganassi Racing Chevrolet has posted an average finish of 6.4 through nine races.

Larson tops the series standings by 40 points over second-place Martin Truex Jr. And for good measure, he’s added two victories in five NASCAR XFINITY Series starts, with an average finish of 2.8. It’s almost too good to be true.

“Yeah it’s been cool,” Larson said. “I expected to… well, I wanted to start the season off good. I didn’t know I would start the season off being the point leader and carrying it through like we have been. It’s just been a lot of fun to show up to the race track knowing we’ve got a fast car and capable of winning almost every race.

The race track isn’t the only place Larson is having fun.

On Friday night at Talladega, he was out on the midway with former Alabama quarterback AJ McCarron.

“Became a big fan of @10AJMcCarron tonight,” Larson tweeted, along with a picture of himself wearing a sombrero.

After all, it was Cinco de Mayo.

After all, it is Talladega, baby!