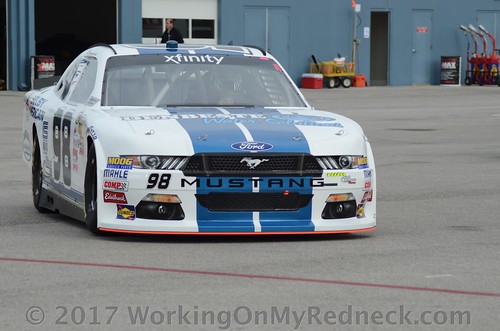 The restrictor plate races of Daytona International Speedway and Talladega Superspeedway are the two race tracks where the playing field is really absolutely level.  If you can make the race, whether it is Xfinity or Cup races, you can win the race!

Aric Almirola charged into the lead with four laps left in Saturday’s Sparks Energy 300 at Talladega Superspeedway and held off Elliott Sadler at the finish to win the third NASCAR XFINITY Series race of his career.

With the Ford of Darrell Wallace Jr. plowing into the inside backstretch wall behind him on the final lap, Almirola held the top spot to the finish, beating Sadler, the series leader, to the finish line by .142 seconds.

The win was Almirola’s first of the season in four starts and his first at Talladega. The No. 98 Ford he drove was fielded by the Biagi DenBeste race team.

“They let me run this thing seven or eight times a year, and I have so much fun, especially at the speedway races,” an elated Almirola said in Victory Lane. “Doug Yates (of Roush Yates Engines) brings some awesome horsepower, and our Ford Mustang was super-fast. I knew it right from the beginning of practice. We ran about 10 laps in practice and I said, ‘Put it on jack stands. We’re ready to go. This thing is fast.’

“What an awesome day.”

In a race that featured five cautions and two wild wrecks, Almirola unintentionally did his own part to help thin the field. Attempting to bump-draft Ryan Reed’s No. 16 Ford on Lap 50, Almirola tapped the rear bumper of the Roush Fenway Racing car too far to the right side and turned it toward the outside wall.

The result was a seven-car collision that eliminated polesitter Blake Koch and Brendan Gaughan, among others.

“I feel bad about the 16–I got into the back of the 16 and tore up a lot of cars,” Almirola said ruefully. “But I got a good push and I got in the back of him. I was trying to help him, trying to make the Fords work together and I hooked him, so I feel sorry about that.”

Sadler scraped the outside wall on Lap 5, thanks to a misguided push from Logano, but he recovered to snag the runner-up spot. In fact, Sadler felt his team’s need to work no his No. 1 JR Motorsports Chevrolet kept him out of harm’s way with respect to the later wrecks.

“We were just one spot short today,” Sadler said.

Kennedy was racing for the first time since the 2016 season-ending NASCAR Camping World Truck Series event at Homestead-Miami Speedway.

“It was a blast out there—we had a great car,” Kennedy said of the No. 2 Richard Childress Racing Chevrolet. “I wish we had another shot at it. It was fun.”

There were 28 lead changes among 14 drivers in a highly competitive race. Almirola led 13 circuits. Allgaier was out front for a race-high 24 laps.

Check out the unofficial results of the Sparks Energy 300 at Talladega Superspeedway.