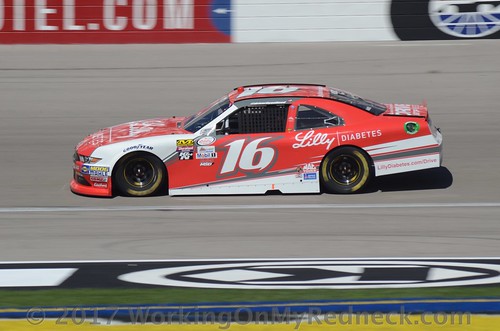 In three NXS starts at Talladega, Ryan Reed has never started outside of the top-10 and has led a total of 37 laps.

Reed won the 2017 season-opening race at Daytona International Speedway, securing a position in the playoff field.  Reed’s previous win came in 2015 where he qualified eighth and led a total of 14 laps before taking the checkered flag.

Reed made his NASCAR Cup Series debut in the fall of 2016 at Talladega Superspeedway.  Reed earned the respect of his peers by running a clean race.  Reed started 18th, completed all 192 laps and crossed the finish line 26th.

Ryan Reed was diagnosed at the age of 17 with Type 1 Diabetes.  Through hard work, perseverance and working with his doctors he’s been able to manage his diabetes and set an example to others.  To learn more visit www.LillyDiabetes.com/Drive

“I don’t know what it is about Talladega, we’ve been fast, led laps, but I get caught up in a wreck every single time.  I have confidence going to every superspeedway.  We have fast cars and Phil (Gould) does a great job making the right pit strategy calls.  My main goal is to finish at Talladega.  If I can keep the car in one piece I’ll be happy.”