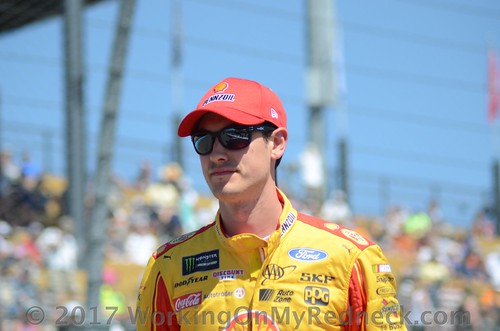 Joey Logano, 26, won his first race of the season Sunday at Richmond in his 300th career start. He’ll attempt to win again in his 301st start in Sunday’s GEICO 500 at Talladega Superspeedway – a track where he won the latest race last fall.

Logano has taken the checkered flag in the last two fall races at Talladega, but claims only two top-10 finishes at the 2.66-mile behemoth in the spring (ninth in 2009 and 10th in 2011; both with Joe Gibbs Racing). Overall the No. 22 Team Penske driver has two wins, four top fives, six top 10s and an 18.7 average finish in 16 starts at Talladega.

The Middletown, Connecticut, native’s win at Richmond put an exclamation point on his strong start to the season.  He has only finished outside the top six once in the first nine races – a 31st-place showing at Phoenix where he led a season-high 82 laps and won the first stage before wrecking out of the race.

Logano ranks fourth in the Monster Energy NASCAR Cup Series standings, 65 points behind leader Kyle Larson. His six playoff points are the fifth-most in the series.

Four drivers besides Logano have won in their 300th start: NASCAR Hall of Famer Rusty Wallace (Atlanta, 1993), along with active competitors Kasey Kahne (Charlotte, 2012), Kyle Busch (Texas, 2013) and Denny Hamlin (Talladega, 2014). None of them won in their 301st start.