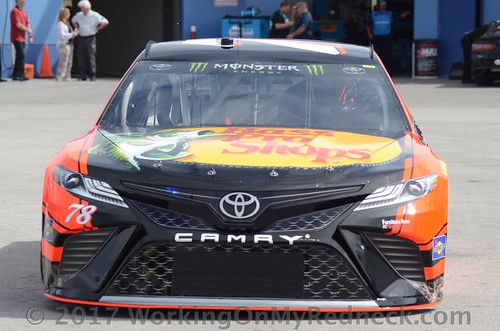 While Martin Truex Jr. has been a consistent performer on the various tracks so far in 2017, he knows all too well the next race – the GEICO 500 at Talladega (Ala.) Superspeedway — can be a humbling experience.

Just take a look at his past record at the 2.66-mile tri-oval, NASCAR’s longest track.

For the record the 10 times he was not running at the finish, seven were due to accidents and three to engine failures.

“There’s no secret about Talladega for any of us drivers,” said Truex. “If you stay out of the wrecks and avoid mechanical issues you will most likely have a pretty good day. But staying out of trouble is a big if at Talladega. The objective is to run with the lead pack and put yourself in a contending position at the end. It’s as simple as that, but a lot easier said than done.”

Truex, who will be driving the No. 78 Bass Pro Shops/TRACKER Boats Toyota this weekend, was dealt a crushing blow in his last visit to Talladega.

The Furniture Row Racing driver qualified on the pole for the October race but on Lap 41 he suffered an engine failure which resulted in a last-place finish (40th), and worse yet, it knocked him out of the playoffs when he had a realistic shot of winning the season championship.

Though Truex has had his ups and downs at Talladega, he has also shown that he knows how to win on the big track. He won three straight NASCAR XFINITY Series races at Talladega (2004, 2005 and 2006).

“I have good memories and bad memories about Talladega, and last year’s race in the playoffs will go down as probably my worst memory,” said Truex. “We had a good run going in the playoffs, but that finish did us in.”

But that was last year and the current NASCAR Cup season once again finds Truex as a weekly bona fide contender.

With one-quarter of the 36-race season completed, Truex is in second place in the NASCAR Cup Series point standings. He moved from third to second following a 10th-place finish at Richmond, which was his sixth top-10 result in the first nine races.

His best finish this season was winning in Las Vegas, the third race of the year, and his worst result was 16th at the Martinsville (Va.) Speedway short track.

Truex’s climb to second in the driver standings has not only been the result of consistent finishes, but also the 100 points he has accrued in NASCAR’s new format of stage racing.

“You won’t get any argument from me about stage racing,” said Truex. “I said at the beginning of the season I liked the concept and it has definitely paid off for us so far.”

Truex has the most stage wins (5) and ranks second for both stage points (100) and playoff bonus points (10).