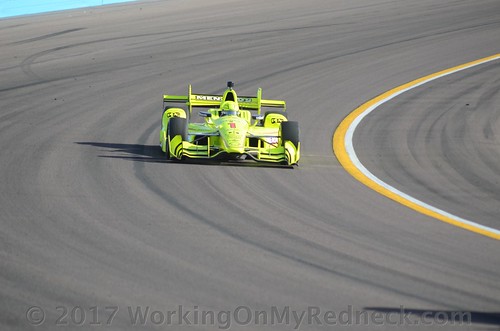 Recap: Simon Pagenaud began the Verizon IndyCar Series’ Desert Diamond West Valley Grand Prix of Phoenix in the fifth position, rounding out the top-five where the rest of his Team Penske teammates began the race. After a multi-car accident on Lap 1, the field was shuffled a bit, and Pagenaud found himself in the fourth position for the restart on Lap 22. On Lap 84, the French-born driver advanced to third where he settled in for much of the first 135 laps of Saturday’s event. His big break came on Lap 138 when Takuma Sato brought out the yellow flag while teammates Will Power and Helio Castroneves were on pit road. Pagenaud’s brain trust on the timing stand determined that they could stay out one more lap which allowed him to take the lead and pit under caution. That fuel strategy made the victory possible, as he was able to keep Power, JR Hildebrand and Castroneves at bay. Pagenaud and the No. 1 Menards Chevrolet led the final 115 laps to collect his first win of the 2017 season and his first on an oval track. In the process, the defending series champion claimed the 450th overall victory in Team Penske history and the 100th win for the team in open-wheel competition. His 10th career triumph propelled him to the top spot in the championship standings and holds an 18-point advantage over Scott Dixon.

Quote: “I can’t explain how excited I am. Ovals are not my specialty. I grew up in Europe racing go-karts. I learned about ovals when I was 26-years-old, so I had to learn the skill and the technique that I didn’t know. Man, this is incredible. What a win. The car was phenomenal and thanks to the Menards Chevrolet crew. On the pit stops these guys never make any mistakes – I can completely rely on them and the car was just incredible from the beginning to the end. The car was so strong at the beginning of the race we were able to save fuel in traffic. And it paid off with that lucky yellow but we’ve had our fair share of bad luck too this year so it doesn’t hurt sometimes to have a little break.”

Recap: Off the heels of Josef Newgarden’s first win since joining Team Penske last week at Barber Motorsports Park, he rolled off the grid for the Desert Diamond West Valley Grand Prix of Phoenix in the fourth position. The native Tennessean quickly moved into the second position before a multi-car crash brought out the caution flag on the first lap. The 26-year-old spent most of the early laps in second behind race leader and teammate Helio Castroneves before he felt there was possible front wing damage. He made stops on consecutive laps to replace the wing and routine tires and fuel to avoid making a protracted single stop. Still, he fell to the fourth position, but there was plenty of race left to make some noise and remained in the top five until more body damage was discovered in the waning laps of the race. As it turned out, Newgarden again picked up some front wing damage in traffic and with just over 25 laps to go he was forced to bring the No. 2 Hum by Verizon Chevy down pit road for repairs. From there, it was a matter of picking up as many positions as possible before crossing the line in the ninth position. Despite the disappointing end to the evening in Phoenix, Newgarden remains firmly in the championship hunt as he holds down the third spot and just 26 points in back of leader Simon Pagenaud. The team heads next to Indianapolis for the INDYCAR Grand Prix on the road course at Indianapolis Motor Speedway with four top-10 finishes to the open the 2017 season.

Quote: “Tonight’s a tough blow. It’s tough when you have a podium car, potentially a winner car if everything goes right, and you finish ninth. We can’t be too displeased over ninth, but I don’t think we’re super happy. I think the Hum by Verizon Chevrolet team is going to truck forward. We think we have fast cars, we’ve had fast cars all year, so hopefully that bodes well for the month of May and we can try to get some more victories.”

Recap: After starting from the pole, Helio Castroneves scored his fourth straight top-10 finish to open the 2017 Verizon IndyCar Series campaign and his second consecutive fourth-place finish in Saturday’s Desert Diamond West Valley Grand Prix of Phoenix at Phoenix Raceway. Unfortunately, the No. 3 REV Group Chevrolet was on pit road just as the final caution flag of the night waved for Takuma Sato’s accident in Turn 4. As a result, when the green flag waved on Lap 149, several lapped cars were between Castroneves and race leader and eventual winner Simon Pagenaud which made the task of catching and passing Pagenaud all that more difficult. Never able to navigate the traffic, the three-time Indianapolis 500 winner bided his time in hope that Pagenaud would get held up along the way in traffic, but that never materialized. Castroneves led the first 73 laps of the race to raise his career laps led total to 5,670 and is just the fifth driver to reach that mark in series history. His Verizon P1 Pole Award win in Friday’s qualifying was the 49th of his career that puts him in a tie for third on the all-time series list with Bobby Unser. In the championship standings, Castroneves holds down the sixth position, 41 points off the pace set by teammate Pagenaud.

Quote: “A lot of battles out there, with teammates even. I’m proud of my REV Group Chevy team. They stayed with it all night. That’s what happens when you have three other amazing drivers. Someday it’s going to be somebody’s day. It was amazing to see. It was a big break for Simon (Pagenaud) on the yellow, but he also was very good. At the end of the day it was a tough battle with some of the guys laps down, which wasn’t really necessary to be honest, but that’s racing. We have another top five in a race, collecting points. We’re going to get our break sooner or later.”

Recap: As was the case last week at Barber Motorsports Park, Will Power perhaps had the strongest car on the track at the Desert Diamond West Valley Grand Prix of Phoenix at Phoenix Raceway. This time, though, the result was much better for the Australian, but not quite what he had in mind when leading 59 laps in the middle portion of the event. Power finished second to teammate Simon Pagenaud to score his best finish of the season after three hard-luck performances to open the 2017 season. He took the lead on Lap 78 as teams cycled through green-flag pit stops and seemed to be in complete control of the race. Power brought the No. 12 Verizon Chevrolet down pit road for a routine stop on Lap 138 just as a Takuma Sato accident brought out the caution flag that all but sealed Power’s fate. When then the green flag waved on the subsequent restart several lapped cars were between Power and eventual race winner Pagenaud which didn’t allow for an opportunity to challenge Pagenaud for the win. While disappointed being relegated to second place, the 2014 series champion was happy to garner a result representative of the car he had under him. It was his first top-five finish since winning at Pocono Raceway last August and snapped a string of five races finishing outside the top 10. The runner-up showing vaulted Power from 13th to seventh in the point standings, 68 markers behind Pagenaud.

Quote: “It was good night considering where we’ve finished the last few races. I’m happy to finish second and get some points. Unfortunately there wasn’t much of a race to be had after that final yellow because there were so many (lapped) car in between. I think the Verizon Chevrolet was the strongest car. I would have liked to have got the win, but I’ll take the points. This was just what we needed for the championship points. We’ve been good everywhere.”

Next Race: The Verizon IndyCar Series now moves into Indianapolis for the month of May. First up is the INDYCAR Grand Prix set for Saturday, May 13on the road course at Indianapolis Motor Speedway. Race coverage will begin at 3:30 p.m. ET on ABC and the IndyCar Radio Network.