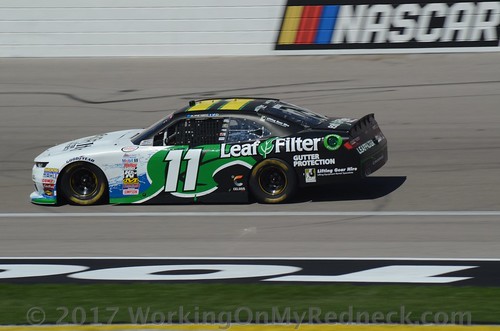 “It was a good weekend for our No. 11 LeafFilter Gutter Protection team. We were for sure better than we have ever been at Richmond. I’m so grateful that we were able to escape any damage at the end there with cars wrecking all around us. Our team works so hard and that can only continue to lead to constant progression. I’m excited to see what next week at Talladega holds for us.”

Koch showed speed in Friday’s two practice sessions, finishing 10th in the first and ninth in the second. Both Koch and crew chief Chris Rice noted that the track surface had really worn since the 2016 season, which would translate into quicker tire wear in the race.

The No. 11 LeafFilter Gutter Protection Chevrolet fired off from the 14th position at the drop of the green flag on a sunny 90-degree day in central Virginia. The race remained caution-free until the end of Stage 1 on Lap 75. Koch, who finished the stage in the 12th position, told the team that the car was a little free on entry and tight through the center of the turns. He pitted on Lap 80 for four fresh tires, fuel, air pressure and wedge adjustments. The team’s quick work on pit road put Koch 10th for the impending restart on Lap 86.

On Lap 115, the caution flag flew while Koch was running 13th. The team did not pit under caution, allowing Koch to restart in the same position with 25 laps remaining in Stage 2. The stage ended on Lap 150 with Koch scored 13th. He reported to the team that he was free late-center of the turns. Rice brought Koch down pit road under caution for fresh tires, fuel, and a wedge adjustment. A miscue on pit road put Koch 18th for the restart on Lap 164.

Koch quickly made up several positions on the restart and was up to the 13th position by Lap 175. The caution flag flew on Lap 181 with Koch in the 12th spot when the field went back to green on Lap 186.

Despite dealing with tire wear in the last 50 laps of the event, Koch soldiered on, narrowly missing an on-track incident with 10 laps remaining that brought out the caution. He came down pit road under caution from the 16th position, but a pit road penalty relegated him to 20th for the restart with five laps remaining in the event.

After completing just one lap, another on-track incident brought out the caution. Koch was again able to avoid damage and restarted 13th for the first attempt at a green-white-checkered finish. As the field came through the backstretch during the white flag, another incident broke out right in front of Koch. Luckily, he avoided contact and was able to cross the finish line 11th.

Koch remains seventh in the NXS Championship standings after Saturday’s race at RIR. Koch and the No. 11 LeafFilter Gutter Protection team will be back on track Saturday, May 6th at Talladega Superspeedway.