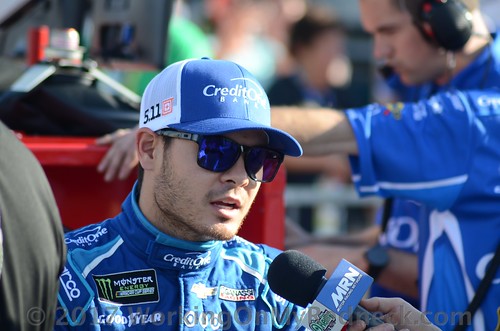 Nevertheless, when two late restarts played out at the .75-mile short track, Larson was the race winner in overtime, and Allgaier was a disappointed second, consoled only by the $100,000 check he collected as the winner of the XFINITY Dash 4 Cash bonus as the highest finishing series regular.

“It’s a bittersweet day, I’ll be honest with you,” said Allgaier, who finished second to Larson despite leading a race-high 157 of the 254 laps. “I’m really dejected—I won’t lie to you. That’s going to hurt for a long time.”

What stung so badly for the driver of the No. 7 JR Motorsports Chevrolet occurred in the final 15 laps of the race. Allgaier was leading, and teammate Elliott Sadler was closing fast on fresher tires, thanks to an aggressive pit call under caution on Lap 184.

But NASCAR had to call a caution on Lap 239 of a scheduled 250 when the engine expired in BJ McLeod’s Chevrolet. Allgaier hit pit road along with the other lead-lap cars, including Sadler, whose only option was a set of 17-lap scuffed tires.

Ty Dillon took the lead out of the pits on a two-tire call, but Dillon jumped the restart on Lap 246, mashing the gas before he reached the restart zone.

After a five-car wreck involving William Byron, Daniel Suarez, Brennan Poole, Harrison Rhodes and Kyle Benjamin slowed the field on the restart lap, and Dillon was sent to the rear of the field because of the restart infraction, Larson had the lead at Allgaier’s expense and controlled the overtime restart on Lap 253.

Restarting in the inside lane, Larson cleared Allgaier off Turn 2 and crossed the overtime line before a wreck on the backstretch caused the seventh and final caution and froze the field with Larson in the lead.

“I’m not good at this place, so a win is pretty neat,” said Larson, who will start 18th as the Monster Energy NASCAR Cup Series points leader in Sunday’s Toyota Owners 400 (on FOX at 2 p.m. ET) at Richmond International Raceway. “I still have to work on myself for long runs. I’m terrible on long runs.

“I was OK today, but (on Sunday) the competition is a lot harder. The drivers are better. Just have to be patient. Struggled in Happy Hour (final practice), so we’ll see how we are (on Sunday).”

Sadler retained the series lead by 41 points over Allgaier, but the driver of the No. 1 Chevy was frustrated, too. Sadler had race leader Allgaier in his sights, having closed the gap from 3.5 seconds to a couple of car-lengths before McLeod’s engine blew.

“I’m proud of the guys for taking the chance we did, and we definitely had the race won,” said the Virginia native, who finished seventh on the set of scuffed tires. “It’s heartbreaking. We really wanted to win here at our home track, in front of our home fans.”

Notes: Larson led 10 laps–the final 10… Allgaier won the $100,000 Dash 4 Cash bonus for the second time this season, having also taken the prize at Phoenix, where he also won the race… In his XFINITY debut, Kyle Benjamin ran consistently in the top 10 until he had to return to pit road to tighten lug nuts after what should have been his final stop. Mired in traffic, he was a victim of the Lap 246 incident and retired from the race in 32nd-place, seven laps down… Astute pit strategy helped Dylan Lupton to a 12th-place, lead-lap finish in his first XFINITY start of the season… Darrell Wallace Jr. finished sixth for the sixth time in eight races this season. His other two finishes are a pair of 33rds.

Check out the unofficial results from the ToyotaCare 250 at Richmond.