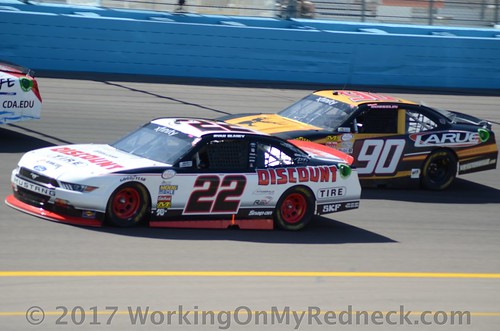 Recap: Ryan Blaney and the No. 22 Discount Tire team captured its fourth-consecutive top-five finish in the ToyotaCare 250 at Richmond International Raceway. The 23-year-old started from the 10th position, quickly moving up to sixth as the race took the green flag on Saturday afternoon.  As the early stages of the race progressed, Blaney radioed to substitute crew chief Brian Wilson that his Mustang was very loose and lacked rear grip. Once the first stage of the ToyotaCare 250 was complete, Blaney had dropped from sixth to ninth. On lap 80, Wilson called his driver to pit road for major chassis adjustments to fix the ill-handling Ford Mustang. Blaney would restart the second stage from the eighth position and would remain in the top-10 throughout the remainder of the second stage. On lap 154, the crew went back to work, again taking a major swing at the handling of Blaney’s Ford. An exceptional stop by the No. 22 Discount Tire pit crew gained Blaney two positions on track, allowing him to restart from the fifth position. Blaney would remain in the top-10 until the races’ end. By lap 239, Blaney fell to the seventh position and, after a series of late race cautions, Blaney was able to drive his way back up to the fifth position. The top-five finish gives the No. 22 team eight top-10 finishes to start the 2017 season, helping the team remain as the leader in the NXS Owners’ Points Championship standings.

Quote:  “It was a long day for us for sure. We made small gains throughout the day but not where we needed to be to run up front. It is something to think about next time we come back here. I didn’t really know the deal with the 3. I guess he jumped the restart. I have been on that side of the deal for sure. It stinks, especially when you have a good car like that. Hopefully the fans enjoyed the race. I know it was exciting from where I was sitting. I think it will be like that tomorrow too.”