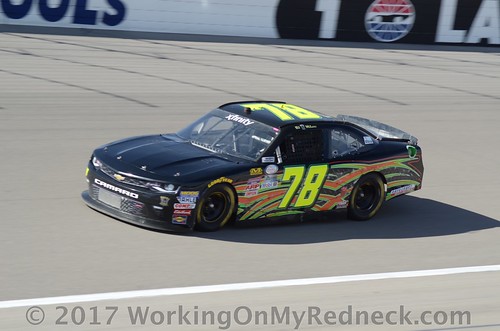 On the heels of satisfying results in a rain-marred weekend at Bristol (Tenn.) Motor Speedway, the team looks to up the ante to close out the month of April in the first of two races on Strawberry Hill.

“We’re looking forward to Richmond this weekend,” said team principal and driver B.J. McLeod. “We’ve had some luck as the season has marched on. We’re focused on ever to keep the momentum train shifting in our direction. We still have some work to do, but we’re excited about our direction and this stretch for our still young growing team.”

In Thunder Valley last weekend, BJMM’s second entry driven by former XFINITY Series champion Jeff Green posted his career-best run inside the top-25, while McLeod overcame a mechanical gremlin to persevere and finish the race inside the top-30.

For Saturday afternoon’s race, McLeod will pilot the team’s flagship No. 78 Chevrolet Camaro, while Virginia native Matt Mills returns to the team for his second XFINITY Series race of the year at what he considers his hometown track.

Last but certainly not least, Texas’s David Starr continues to surge forward in his No. 99 Chevrolet in the third XFINITY Series entry.

Thompson Electric returns as the primary partner on Mill’s No. 8 Chevrolet.

Founded in 1977, Thompson Electric, Inc. is a diverse full service electrical contractor with highly trained and experienced crews that can perform any electrical task.

Whether it’s constructing or maintain substations, transmission or distribution lines, providing emergency storm restoration, lighting the highways and controlling traffic flow, or installing and maintaining the electrical systems within your facilities, no job is too small or too large.

McLeod, a native of Wauchula, Fla. will make his third career XFINITY start at the D-shaped Richmond International Raceway.

For Richmond, B.J. McLeod Motorsports is proud to welcome the additional support of Baker’s Crust Artisan Kitchen, ICE-FROST and @CouchCrewChief who will serve as associate marketing partners for the team’s 41st career XFINITY Series race.

Be sure to follow B.J. McLeod Motorsports on social media; Facebook.com/bjmsinc, on Instagram (@BJMcLeodMotorsports) and on Twitter@TeamBJMcLeod.